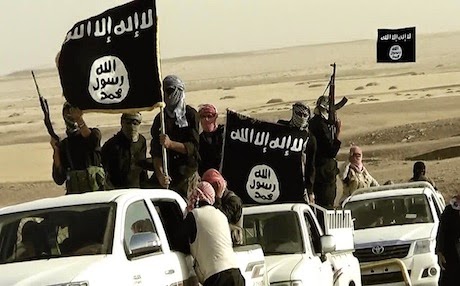 The sudden victorious assault of the disturbing "Islamic State of Iraq and Syria" on northern Iraq is the jumping off point for my new article on Iraq. It's over on the Kasama site. It begins:

"Imperialism's chickens are coming home to roost in Iraq, and once again it is the people of the region who will pay the price.
In a week of events that is in some ways shocking and in other ways not even slightly surprising, a radical Islamic fundamentalist group called the Islamic State of Iraq and Syria (ISIS, sometimes translated as the Islamic State of Iraq and the Levant, or referred to by the Arabic name Da'ish) seized Iraq's second largest city of Mosul, and capturing more cities along the way, has advanced as far as Baquba, just 50 kilometers from Baghdad, the Iraqi capital."


The article gives background and history of ISIS, a hundred years of Middle East history, and ends with a discussion of why building an antiwar movement in the United States is such a crucial imperative. Check out the whole article and let me know what you think.

NO US INTERVENTION IN IRAQ!

Posted by ish at 8:52 AM No comments: Links to this post