How much is Assata's life worth? 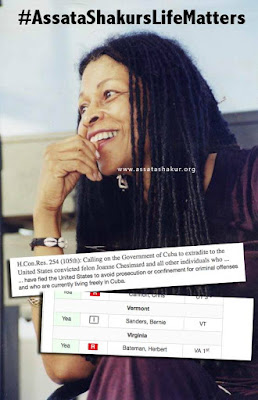 Assata Shakur is a hero of our time. Her autobiography is required reading. "Assata Taught Me" tee-shirts have become ubiquitous in the era of #BlackLivesMatter. And yet, liberal Democratic Party presidential candidate Bernie Sanders is on record voting to extradite Shakur, called here "Joanne Chesimard," from Cuba where she now lives, back to prison in the United States. How do supporters of Sanders justify this? Personally, I hope Assata doesn't ever #FeelTheBern and stays free in socialist Cuba.

Posted by ish at 12:58 PM No comments: Links to this post

Hijack! Bernie Sanders and the Message of Occupy Wall Street 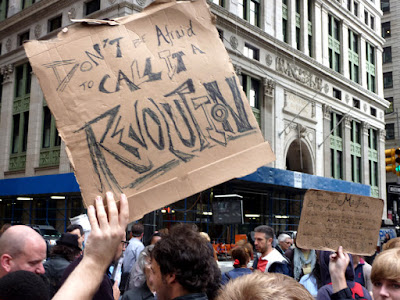 Back in Occupy, there were three contending forces challenging economic injustice in this country. There were the End The Fed Paulite rightwingers, who thankfully in NYC were always a tiny minority; there were the Money Out of Politics people, usually also in the minority but generally identifiable as more middle class and more Democratic Party/mainstream oriented; and then there were the social radicals, the anarchists, leftists, and community activists. There was certainly tension in this last group between those who wanted to bring up big-picture, ideology-rooted solutions and those who wanted to engage in strictly responsive organizing, but this third group managed to dominate Occupy as a whole. It certainly did in Occupy Sunset Park in which I was very active.

The genius of Occupy Wall Street included building the kind of united front where these forces could coexist. Had either the End The Fed people or the Money Out of Politics people dominated, Occupy would have been truncated, and of negligible longevity or impact. It was the presence of the social radicals—and I credit the anarchists above all—who dared to make challenging the fundamentals of capitalism seem like everyday possibility.

What we are seeing in the 2016 elections is the seizure of the message and the remnants of momentum by the Money Out of Politics people, and this is not actually a good thing. It was very clear watching Bernie Sanders in the New Hampshire debate how limited this vision is, and how un-radical it is. This is actually Sanders' central focus, and far from containing any kernel of socialism, it is anything but a politically revolutionary demand. Of all the exploitative, oppressive, and broken things about capitalism in the USA, the fact that money buys political influence is the least remarkable. It is either naive magical thinking or deceptive ideological dishonesty to present money in politics as the keystone issue of our times, and to channel the obvious and massive popular discontent into the umbrella of reforming campaign financing and Wall Street influence represents not the triumph of popular upsurge but an attempt by a certain ideology to hijack social momentum. Sure, Wall Street is odious. But it is odious because it is the essence of capitalism not some discoloration of imaginary American democracy.

The enthusiasm behind Sanders' campaign is certainly remarkable, showing many of the signs and symptoms of a real social movement. But let's be clear: the Sanders campaign is not some kind of spontaneous popular upsurge, it is a Democratic Party election campaign, and even if it is often at odds with wings of the Democratic establishment, it is anything but a real social movement with open-ended revolutionary potential. Social radicals, who understand how ideology, class, and leadership function, should not be coddling the illusions consciously fostered by the Sanders campaign; it will come to regret surrendering to a wing of the Democratic Party.

Occupy reminded us that "another world is possible." The world the Sanders campaign is advocating looks a lot like this one. The rich ideological heritage of social revolutionaries identifies capitalism as the problem, and presents us with the imperative of revolutionary change. Setting aside competing strategies and visions for the moment, we would do well to remember all those ideologues and freedom fighters who understood that it is literally impossible to see mass justice and liberation under capitalism, even a capitalism slightly tamed by reform. Hope is a beautiful thing, but to triumph, hope must be informed by an accurate diagnosis of the problem and a prognosis for a cure.

Social radicals who have signed up to organize for Sanders are surrendering the future for the illusion of popular support. It's called opportunism, and it also doesn't work. The Democratic Party is stronger than we are, and they're gonna stay that way unless we make the break that generations of freedom fighters before us understood.
Posted by ish at 7:12 AM No comments: Links to this post