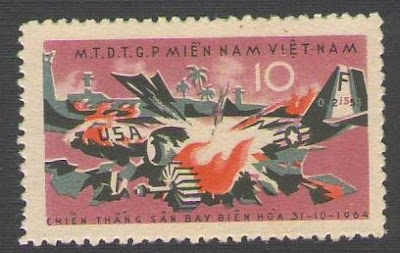 This stamp was issued by the National Front for the Liberation of South Vietnam (NLF, the so-called Vietcong) as propaganda and for use in areas under its control in 1965. It marks the anniversary of the November 1964 NLF attack on Bien Hoa airbase. While today Bien Hoa is an airbase of the Vietnamese People's Air Force, during the war the air field was heavily used by the USAF in its war against the people of Vietnam. While the base, located near Saigon, was attacked many times during the war, in 1964 the NLF attacked the base with mortars destroying twenty U.S. aircraft including bombers. The attackers successfully slipped away after their victory. The stamp shows burning and exploding airplanes at the base.
Posted by ish at 8:00 AM