Anti-American Art: We Finally Really Did It! You Maniacs, You Blew It Up!* 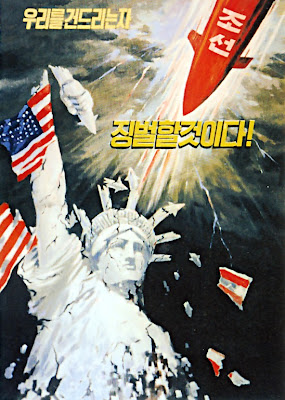 "He Who Provokes Us Shall Be Punished" reads this undated revenge-fantasy poster from the DPRK. It shows a North Korean missile wreaking havoc on the Statue of Liberty, shredding American flags as it goes. It's another poster from the amazing "North Korean Posters: The David Heather Collection" with Koen de Ceuster, and published by Prestel.

Heather and de Ceuster's book is a beautifully-printed compilation with almost 300 pages of full-color reproductions of North Korean propaganda posters, all with English translations of the Korean slogans. The posters are amazingly bright and energetic; and in addition to the extensive selection of anti-American posters there're posters on everything from combatting sexual violence against women to saving tap water. The total effect is like some fantastic totalitarian graphic novel. Taken together the images present a mythic, idealized (and idolized) view of the North Korean population as a cheerfully determined, proudly resolute, and defiantly fierce people. There's no failure here, no doubt, no opposition and no food shortages. Curiously left out are any posters of the vast personality cult around Kim Jong Il and Kim Il Sung, and the omission of such images reinforces a sort of egalitarian mythos. I know that there is a vast iconography of these two, and I suspect the book would have a different, more alien feeling if such obsessively leader-worshipping subjects were included. It's an interesting choice on the part of the editors. Surely the picture it paints of North Korea is not more realistic than the picture painted by American automotive and feminine hygiene advertising, but if you're a fan of all the Anti-Americana here at The Cahokian, or just interested in propaganda art or dynamic graphic design, you'll want to check out this book.