Anti-American Art: The Devil in the Details 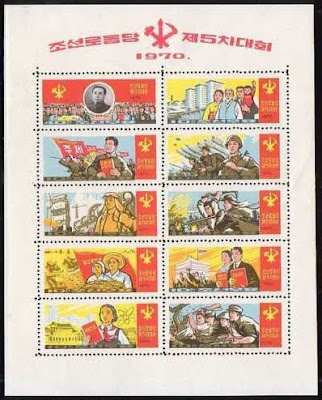 Above is a souvenir sheet of stamps issued for the 1970 Congress of the Workers Party of Korea, the same august body that just met to annoint a probable successor to the ailing Kim Jong Il, the Dear Leader of the People's Democratic Republic of Korea. Back in 1970, North Korea was run by Kim Jong Il's dad, Kim Il Sung; it will be interested to see if Kim Jong Il's son Kim Jong Un actually assumes power. Anyway that's Kim Il Sung in the upper left; the other stamps have themes of agricultural and industrial development, military readiness, scientific advancement, and of course the requisite anti-American sentiment, of the "take that" variety.

Note the logo of the WPK: instead of the hammer and sickle logo of traditional Communism, they've designed a clever hammer, brush and scythe design, adding the writing brush of the intellectual and student to the proletarian hammer and the peasant farm implements.

In the middle on the right is the relevant stamp celebrating the South Korean uprising against dictatorship of 1961 that the North hoped would lead to reunification. On this enlargement of that stamp you can see the armed Korean workers spearing an American soldier while government buildings burn in the background and the American flag lies shredded below. 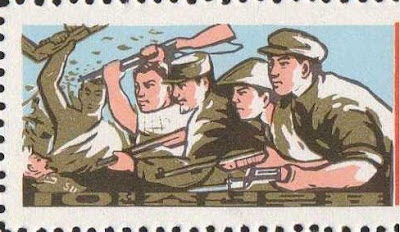 But wait, there's more! The stamp on the lower right shows another American soldier "taking that!" from an international guerrilla army of Chinese, Vietnamese, Cuban, African and apparently European revolutionaries. But oops! There's a mistake. Comrade stamp designer accidently spelled "US" backwards, "SU." Fearing that the Soviet Union, then bankrolling Korea's development and defense, would take offense at the apparently subversive misspelling, as soon as the error was spotted the North Korean government recalled the sheets of stamps, detached the offending lower right one, and then re-released the redacted survivors. The full sheet shown here and this detail is a rare peek at the full sheet almost never seen. Stamp collectors in Korea and abroad only got the strangely incomplete sheet. One hates to think about what happened to comrade stamp designer...
Posted by ish at 8:00 AM