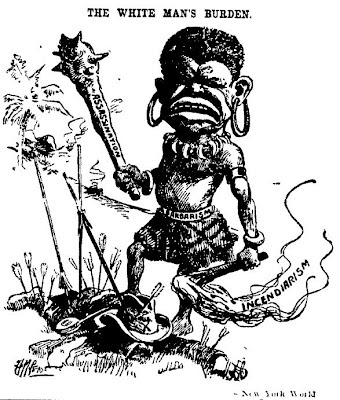 Something stinks on the internet.

Yesterday the video "Kony 2012" produced by the organization "Invisible Children" reached a bizarre critical mass on the internet. It was inescapable on facebook: if you're like me, seemingly all your friends who have a social conscience shared it earnestly with heartfelt calls to spread its message. It gathered millions and millions of pageviews overnight.

Kony 2012 is slick. It's got extraordinary production values for an internet meme sensation.

It also has a message of mobilizing popular support behind American military intervention across a swath of Central Africa. It's got rightwing pig Senator James Inhofe ("he wanted to assure people that lifting the ban on gays in the military has not led to the legalization of bestiality..."). It's got religious fundamentalist backers. It's got a dubious financial record as a charitable institution. It's got a hypothetically sinister role in the new cold war between the U.S. and China over Africa's resources.

After reading various pros and cons over Kony 2012, I finally watched the video. I found it creepy and disturbing. It is slickly manipulative, leading the viewer through an argument full of flawed logic, questionable assertions and sleights of hand, referencing just enough plausibility to make its emotional resonance seem legitimate. It even uses some of the messaging of the Occupy movement, almost as if its makers are hoping to siphon off the energy from the social justice cause du jour to their absolutely manufactured crusade.

Of course the warlord Joseph Kony and his Lord's Resistance Army (no longer actually in Uganda) are thoroughly unsavory characters. But it is not possible to look at Kony's anarchic warlordism — or at civil unrest across Africa general — in isolation from the story of classic colonialism, imperialism, and today's neocolonialism. Africa's vast natural resources are the battleground of the future. Western humanitarian intervention in Africa is always more complicated than it looks; it is never a simple story of saving lives.

Like many countries in Africa, Uganda is the playground of American evangelical fundamentalists. Using charitable assistance as a kind of Trojan horse, this right-wing political movement has insinuated itself in local culture. It's responsible for the rise of legal repression and brutality against gay, lesbian and transgendered Africans in several countries. The Ugandan parliamentary bill that has been on the verge of passing for a couple years now that promises the death penalty for homosexuality is the documented brainchild of American Christian fundamentalists working with local right-wingers. This movement is similarly responsible for harnessing AIDS prevention and family planning to conservative Christian ideology. It strikes me as highly unlikely that the ever-so-likeable "Invisible Children" of Kony 2012 are not utterly intertwined with these modern missionaries of hate.

There's much about the video that just seems questionable. Like how self-referential it is, suggesting somehow that the video had impact before it was even made. It's classic propaganda designed to tug the heartstrings and deflect scrutiny from its assertions. But it also strikes me as tragically familiar, hence my choice of illustrations for this essay. "The White Man's Burden" is the deeply racist notion, from the height of the colonialist era, that civilized white people had the duty to rescue the black and yellow "savages" from their state of barbarism and bring them to civilization. From Rudyard Kipling's poem:

"Take up the White Man's burden--
The savage wars of peace--
Fill full the mouth of Famine
And bid the sickness cease;
And when your goal is nearest
The end for others sought,
Watch sloth and heathen Folly
Bring all your hopes to nought."

It's amazing that this video seems to successfully convince millions of do-gooders, many of whom you would think would know better, that if only American military forces were tromping across the African countryside that things would actually get better for long-suffering Ugandans! White people, Americans and Europeans all, need to stop meddling in Africa. The real truth must be told: seemingly senseless civil conflicts like the one around Joseph Kony are the rotten fruit of neocolonialism. All these private armies have their origins in the halls of America and Africa's former colonial masters. Kony's brutality dwarfs before the ruthlessness of direct American meddling around the world and the shockwaves it unleashes.

One can look at a nightmare like Somalia and make valid criticisms of local and regional factions and forces. But if you step back and take a long enough view, you realize that what happened to Somalia was that it got in the way of the cold war. Somalia is like it is today because of neocolonialism, tossed aside like a dried husk when the cold war ended.

Honestly I never heard of the Invisible Children and the Kony 2012 campaign before this week. Some people I know claim to have heard of it before. But I smell a big fat rat. People who should know better are being had by this video. I predict that when the truth comes out about this "spontaneous viral explosion" of concern over Kony and Uganda it won't be pretty. Its oh-so-innocent call for military intervention in Africa will prove to be no accident. And it's cast of concerned "bipartisan" government figures will prove to be a gallery of rogues. Beware.

The main enemy is at home.

(Highly offensive racist cartoon "The White Man's Burden" above from the mainstream New York World of 1899 courtesy of YesterYear Once More blog). If you're living in a tree and haven't seen the original Kony 2012 video, here it is:


UPDATE: My friend Jon reminds me of Mark Twain's bitter 1901 essay "To The Person Sitting in Darkness." A kind of reply to "The White Man's Burden," it's a must read and totally relevant to the Kony 2012 phenomenon. Read it here.
Posted by ish at 1:00 AM