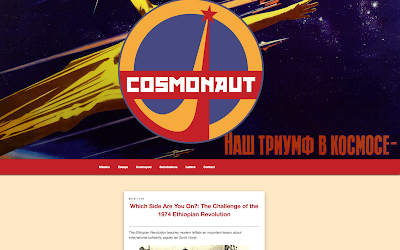 The really impressive independent communist website “Cosmonaut” commissioned an article by me on the Ethiopian Revolution. It’s framed as a discussion of internationalist solidarity. It’s based on the themes of my book manuscript, which I am currently shopping to publishers.

Here’s how it begins:

“Way back in 1848, the young Karl Marx and Friedrich Engels admonished in their Manifesto of the Communist Party, “Communists everywhere support every revolutionary movement against the existing social and political order of things.” This basic prescription for political solidarity flows obviously and organically from the understanding of global political economy that they (and their ideological heirs) spent decades investigating, defining, and fighting for on street barricades. Marx and Engels diagnosed that the vast majority of the world’s population shared a mutual interest by virtue of its exploitation and oppression at the hands of a global class system, here in corrupt decay, there in bloody infancy. They suggested a liberatory class struggle as a path of resistance that was conveniently locked inside that global political and economic system and enabled by its own contradictions. To reject, indeed to overturn, that global system of exploitation and oppression of the vast majority of humanity by a tiny controlling minority of kings, political elites, and captains of industry, Marx and Engels prescribed not only moral outrage, but an understanding they called “scientific” of how those oppressed and exploited people could employ their vast majority in numbers and their strategic social relationship to the means of production to win the class struggle, and with it a better future for humankind based on cooperation and the communal good.”


Read the full piece on Cosmonaut, and don’t forget my Ethiopian Research Project blog here.
Posted by ish at 8:41 AM