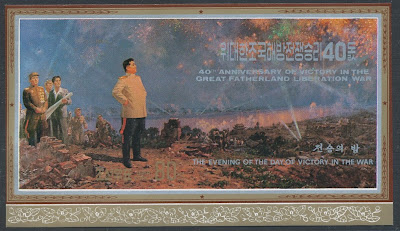 In honor of yesterday's shelling of Yeonpyeong Island by the army of the Democratic People's Republic of Korea, here's a stamp from North Korea ca. 1993 commemorating the "40th Anniversary of Victory in the Great Liberation War." That's father of the nation Kim Il Sung standing in the wreckage of Pyongyang "on the evening of the day of victory in the war" in 1953, his advisors already rushing up to him with plans to rebuild, watching celebratory fireworks. Click on the image to see this panoramic painting in its full glory.

As for yesterday's military confrontation, as of this writing the shelling hasn't resumed, and most of the Western media is of course suggesting the North Korean attack was unbridled aggression. Which it may have been. Or not. The NY Times does report, "The attack on Yeonpyeong came as 70,000 South Korean troops were beginning an annual nationwide military drill called Safeguarding the Nation. The exercise has been sharply criticized by Pyongyang as “simulating an invasion of the North” and “a means to provoke a war.” The official North Korean news agency said in a brief statement on Tuesday night that the South “recklessly fired into our sea area.”

Thank goodness for our independent media. (That's sarcasm, by the way.) With the earlier sinking of the South Korean warship the Cheonan, the media has assured us that it was the work of the dastardly North Koreans, a cry for help from the deranged family dictatorship of the Kims. So what's next? At the risk of courting conspiracy theory territory, let's take a brief history lesson. (Let me add that while I'm not actually a fan of what appears to be a dictatorship in North Korea, I do think the North Koreans have every right to defend themselves against American provocation. A just peace would be better.)

* Remember the Maine! The FoxNews of its day egged the U.S. into war with Spain after the USS Maine exploded in Havana, Cuba in 1898. While the explosion was blamed on the evil Spanish empire, no cause or claim was found, and one investigation years afterward suggested the Maine exploded because of an onboard coal fire.

* The Tonkin Gulf Resolution. From President Johnson's 1964 speech: "Last night I announced to the American people that the North Vietnamese regime had conducted further deliberate attacks against U.S. naval vessels operating in international waters, and I had therefore directed air action against gunboats and supporting facilities used in these hostile operations. This air action has now been carried out with substantial damage to the boats and facilities....America keeps her word. Here as elsewhere, we must and shall honor our commitments.... In recent months, the actions of the North Vietnamese regime have become steadily more threatening...As President of the United States I have concluded that I should now ask the Congress, on its part, to join in affirming the national determination that all such attacks will be met, and that the United States will continue in its basic policy of assisting the free nations of the area to defend their freedom. As I have repeatedly made clear, the United States intends no rashness, and seeks no wider war." Shortly thereafter, the US Congress gave authority to Johnson to begin the Vietnam War. And oh wait, there was no actual North Vietnamese attack on a US ship in the Gulf of Tonkin. The media failed to question the official accounts and urged Americans to back Johnson and Congress's resolve to punish the Vietnamese.

* From Answers.com: "Although war is a time of hardships and usually poverty, World War 2 had many positive effects for America. One point of prosper was economy. Some said that the Second World War put an end to the Great Depression." So since the current small wars in Iraq and Afghanistan have done nothing but drain the U.S. economy, how 'bout a really big war with China to make things right? China has nukes but doesn't have anything like the old Soviet Union's array of ICBMs. It could be the perfect solution!

P.S. See my earlier post here for an example of how the NY Times chooses to promote unsubstantiated claims about North Korean "aggression."
Posted by ish at 8:00 AM