I Was a Teenage Trotskyite Spy

I was reminded in the comments to yesterday's post of an experience I had as a very young adult.

I've written here before about how when I got to college in 1976 I made some questionable choices. I had witnessed so much revolutionary social change up close in my young life, I couldn't believe that the student revolution was over. The Vietnam war had ended the year before, and I mean really ended with the expulsion of the last Americans and the destruction of their despotic puppet regime. My mother worked in academia and for a dozen years she had brought home tales of radical students running about from protest to protest and occupying administration buildings. During the 1968 Democratic Convention our living room was filled with bloodied students and staff taking refuge from Mayor Daley's police riot in the park.

I fancied myself a leftist and the minute I got settled in my dorm I went looking for the revolution. There was some kind of student organization orientation, and I remember carefully visiting all the radical student group tables. There was the Young Socialist Alliance, the Spartacus Youth League, what I think was then called the Revolutionary Student Brigade, and a handful of others. I bought a few newspapers, a couple pamphlets on world struggles with exciting evocative covers, and exchanged phone numbers with a few student organizers clearly eager to get started recruiting fresh meat from the incoming class. This was at University of Chicago on Chicago's south side: it had a history of radical activism going way back. And everybody knew that UC alum Bernardine Dohrn was then leader of the Weather Underground and actually organizing from underground, on the run from the Feds. I hadn't paid so much attention to the fact that UofC was also home to the infamous Chicago Boys, the murderous economists led by Milton Friedman trying out their crackpot freemarket economic theories on the backs of Chileans freshly subdued by a CIA-supported coup d'etat. The sad truth was that the UofC was actually more a hotbed of rightwing activism by then than left.

Anyway I met a guy named San from the Sparts. He was a really smart guy who really knew his stuff, could argue esoteric political points aggressively like nobody's business. He had a little bit of a crazy eye, which made him very intense, and although his tendency to argue until his lips were literally flecked with foaming spittle concerned me, he was very persuasive. I actually liked him quite a bit. I was fascinated by Trotskyism, even though I thought of myself as a bit of a Maoist. It seemed so noir, sort of dangerously romantic, evoking both courage and tragedy in its losing struggle against the current of Stalinism. My knowledge of Marxism-Leninism was very superficial, and it wasn't hard for San to convince me that Stalinism and Maoism had spent as much time, energy and blood preventing social change as engendering it.

I was what was called in Spartacist lingo a "contact." Which meant a sort of potentially recruitable interested person. San was quickly assigned to try to recruit me, another freshman and classmate named David (this is a different David, by the way, than I have referred to elsewhere in this blog), and a graduate student named Larry. All of us had expressed interest in the SYL and were deemed to be serious enough to be recruited.

The Sparts had -- well actually have, they're still around and their MO seems unchanged as near as I can tell now decades away from contact with them -- a bit of an obsession with other groups on the left. They called them "OROs," or "ostensibly revolutionary organizations," and somehow believed that the key to their own success was in harassing other left groups and showing them up to be not as authentically Marxist as themselves. They hoped to defeat the organizing efforts of their competitors, and I suppose, hoped to pick up survivors from the presumed wreckage of people disillusioned in the politics or practices of these competing sects. Something about the obscurata of all these sects fascinated me: like a stamp collection or a forgotten shelf in the library the self-perpetuated hair-splitting differences of various left parties, all tiny and all self-important, was endlessly amusing. Though I never developed the hectoring polemical verbal finesse of a good Spart, I was for a brief moment enthralled by it.

Anyway as I confessed before I eventually became a member of the Spartacus Youth League, and though it was such a formative time in my life that it seems like I hung around them for decades, I did so for almost exactly two years before moving up and out. Right about the time I felt like I was ready to sign up with them, I remember San took me aside.

There were two main Maoist parties in the U.S., both led by former members of different SDS factions. One of them, the October League, led by Michael Klonsky, was about to rebrand itself as the Communist Party Marxist-Leninist. This was big news because the CP (M-L) was also reputed to be winning official recognition from the Chinese Communist Party. Mao had just died, and while the brakes had been put on the Cultural Revolution, the People's Republic had not yet gone on the "capitalist road." When that happened the other big Maoist sect -- the Revolutionary Communist Party -- broke with China. A third one became loyal to Albania's Enver Hoxha but that's a story too pathetic to even try to recall. But the CP (M-L) was set to become what it hoped would be the pro-Chinese equivalent of the old school pro-Soviet Communist Party. That never really happened, but for a moment in the seventies it seemed, at least to them, feasible. And the CP(M-L)'s founding congress was going to be held right there in Chicago. And it was most definitely not a public event.

San told me the Spartacist League wanted to observe that congress, and of course, roundly hated by the Maoists, there was no way that was actually gonna happen. (Back then when Maoists saw Trotskyists they usually started spontaneously chanting "Ice pick! Ice pick!" in reference to the weapon agents of Stalin used to assassinate Trotsky in Mexico in 1940). He knew that I had talked to all of the different left groups, and well knew of my tentatively abandoned fascination with Mao. 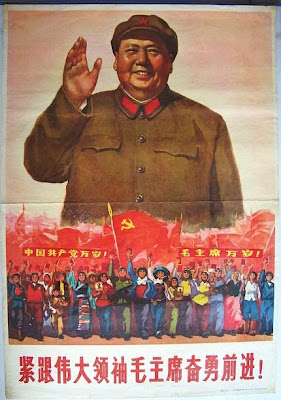 He asked me if I would talk to the October League activist I had met and ask if I, an innocent, unaffiliated and open-minded individual, could get an invitation to the CP (M-L) congress. He asked me to be a spy! In his (and my!) defense I don't believe there was anything disruptive intended. Nor do I believe that there was anything fishy in a, how shall I say this, government-influenced way. I think they just wanted a first-hand report of an important competitor's event. I, of course, said absolutely. That's what teenagers do, and I was 18. I don't remember her name but I went up to one of the Maoists I had met. "Hey I hear you're having a founding congress. I would love to attend!"

I remember raised eyebrows. Her response was guarded. I reminded her of how I was interested in Chairman Mao and her organization. "Maybe," she said. Skeptically, she exchanged phone numbers with me. She'd get back to me. I reported back to San, and he presumably went back to the Spart leaders and said the groundwork had been laid. I vaguely remember that this was all the very week leading up to the Congress. I remember feeling flushed with excitement. Nervous at my white lies, but I really wanted to see a Maoist party congress!

The night before the event I got a disappointing phone call. "We've made a policy decision," she said. "We're only inviting party members." I was so disappointed! And relieved. Who knows what happened at that Congress. I surely read about it in their newspaper, but the world has forgotten what happened there as surely as it has forgotten the long-gone October League and its long-gone successor the Communist Party USA (Marxist-Leninist). Ironically, though my undercover career was abortive, when the competing Maoist group the RCP split in two the next year, a disguntled RCP member apparently dropped off a stack of documents with the Sparts for maximum impact: the leftist world learned of that factional crisis from the screaming headline on the Spartacist newspaper Workers Vanguard, "RCP SPLITS!" followed up with excruciating detail.

Anyway within a couple weeks I joined the SYL at the same time as my classmate David. We would set up a literature table in some commons area on the UofC campus a couple times a week. I was a terrible leftist newspaper salesman but I dutifully made the attempt every time I was so assigned. One day I heard a familiar female voice behind me. "Comrade!" I knew that voice; I was so busted. The blood rushed to my cheeks. "Comrade, Chairman Mao teaches us to be open and above board!" I turned and sure enough, it was my skeptical Maoist. She had a look on her face I have never forgotten, a knowing, contemptuous smirk colored with "I-knew-it" amusement that turned me into a puddle on the ground, wishing in my mind's mortified eye I could disappear the Spart newspapers I was feebly hawking. She turned and walked away. I had just proved that Trotskyites are spies. And so ended my brief but glorious career as a secret agent.

The top graphic is the cover of the transcripts of one of the Moscow Show trials, conducted by Stalin in the Soviet Union in the 1930s to eliminate all left-wing opposition to his rule. I snagged it from the fascinating web magazine The Art Bin which republished them as an artistic inquiry. They're chilling reading...I used to own a couple. The Soviet government and international Communists were proud of these trials and you used to be able to easily find the thick trial transcripts bound into hardcover books at second-hand shops. The Trotskyists and fellow oppositionists all confessed to terrible crimes which had been completely invented by the Stalinist prosecutors, who were themselves purged in later show trials. Among the charges levelled against the Trotskyists was spying. Oh my sense of humor. The second graphic is a random Mao poster from cultural revolution era China.
Posted by ish at 7:30 AM