Anti-American Art: I Am The Manchurian Candidate 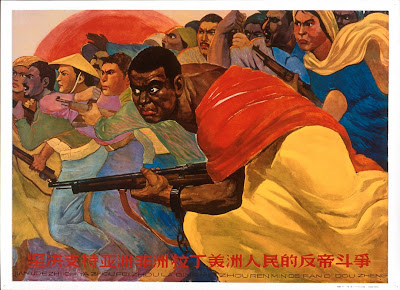 It's the armed peoples of Asia, Africa and Latin America rising up against American imperialism again, in super-saturated colors and, well, some pretty imaginative "native dress." It's a Chinese cultural revolution poster from the 1960s, and I actually once owned this poster; I bought it as a young teen in the early 1970s, though my poster ended up ripped and ragged and didn't survive my youth.

We lived for a few years in Evanston, the first suburb just north of Chicago. The transition from Chicago to Evanston isn't really noticeable; the visual shift to suburb starts to happen part way through Evanston towards Skokie. It was not ranch houses and perfect lawns. Anyway the first actual house we lived in was right by Northwestern University, and in a row of shops nearby was the Peking Book House. It was a Chinese government propaganda outlet; I'm not sure how it operated since this was right before the post-Nixon normalization of relations and the lifting of the trade embargoes. In the days when any Chinese immigrant was presumed to be a refugee from Communism, Mr. Chen and his shop clearly bucked that trend. He had a huge selection of Chinese posters, pamphlets and books, plus Mao buttons and a whole rack of blue or green Mao jackets with matching caps. He had a wall of Little Red Books --the Quotations of Mao Zedong -- in shiny vinyl sleeves in dozens and dozens of languages. I imagine his intended audience was the very international student body of Northwestern and the associated student radical milieu (the Vietnam war was most definitely still on, remember). Though I don't actually recall seeing anyone else in his shop on my frequent visits. (Crazily a google search reveals that the shop and Mr. Chen are still around thirty-odd years later).

You may ask what kind of teenage boy spends his allowance on Mao buttons and revolutionary anti-American posters. Well, the kind who grows up to write a blog like this one! I bought 10-inch LP recordings of Revolutionary Peking Operas -- Taking Tiger Mountain by Strategy now replaced by CDs is something I still enjoy listening to. I bought a couple little red books, and frankly the English version is mostly as indecipherable as the Lao version I used to own.

So put this idealized, racially questionable, boldly illustrated poster into the column of highly effective propaganda vehicles. Here I am some latter-day Manchurian candidate, reactivated by the hidden clues first exposed to my tender young brain.

But enough about me. Look at this poster....keep looking. Go ahead, click on it and see it larger. Pay attention to the sound of my voice.... See the pretty bright colors. See yourself in the poster... Feel the righteous wrath of the people around you... You are getting sleepy... you're drifting off into the poster. When I snap my fingers you will awaken and you will be resolutely determined to smash U.S. imperialism...