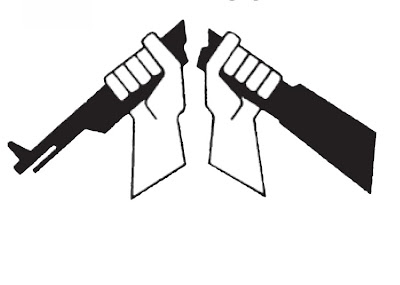 What does it mean to be committed to peace, to be fully committed to resisting the folly of war? I found an amazing document. It's an article written by my father, Peter Horst, during the time he was fighting the draft as a conscientious objector in the late 1950s. Frustratingly missing the first two pages and an unknown number of concluding pages, it details the basis for his refusal of military service. It seems to date from late 1956 or 1957, written either right before or during his chosen alternative civilian service with the American Friends Service Committee.

He believed that what he called "Brotherly Love" could be elevated to the moral principle of religion, and that this devotion to living out what might be to some an abstraction was to him a call to refuse actions that violated his beliefs. The first part of the document I found is a measured theological defense of what he called the religion of brotherly love. He cites Christianity, Hinduism and Buddhism without suggesting that his beliefs were the doctrines of any single faith. But what I'd like to present here is a section toward the end on the reasoning behind rejecting, behind resisting, violence and war.

I know that he defended his conscientious objection for years and years in the courts; I assume that this document was written to support his legal case by codifying his position. I find the document not only personally inspiring but tremendously relevant. In discussions on The Cahokian and elsewhere on the meaning of war in a historical sense and on confronting the challenges of today's wars in an absolute real sense, I find much here that validates my own beliefs. And above all, at a time when the military's proscriptions against gays may finally end with the possible repeal of Don't Ask Don't Tell (DADT), this document reinforces my view of why as important as it is to struggle against discrimination, struggling against militarism and war should be a moral imperative that leads justice-seeking people to reject the military itself. Here is an extended excerpt:

WHY I MUST REFUSE TO BE A SOLDIER
by Peter Horst

I believe that one must love one's enemies, and that by so doing they will cease to be enemies, since Love begets Love. If a person in a situation of violence attempts to use Love as his weapon, and fails, I believe it is the fault of imperfect use, not the fault of the weapon. In the case of an individual citizen in a nation committed to the use of violence, it is possible that he might never face the enemy to test that weapon, especially in this age of long-range electronic and atomic weapons. But to regard the belief as worthless, simply because other weapons are in official use, would show a lack of faith in the true worth of Love.

Military weapons, unlike the religious belief of Love, have been tried, and proved worthless by the number of wars to end wars in this century alone. But Love has converted enmity to Love in many cases: Christ's crucifixion, Gandhi's crusade in India, countless individual cases of the use of non-violent defense, have all proved that Love is a power excelling hatred.

Committed to Brotherly Love, I must therefore refuse to kill. I believe an army is organized in direct opposition to my religious values, and promotes only hatred and violence. Therefore I must refuse to participate in any military activity. It is foolish to think that an army can make room for Love of enemy. Even though there are non-combatant positions open in an army, they only further the military cause; therefore I refuse to accept any military position.

My belief in the power of Love is such that, when ordered to act in opposition to it, I must refuse. I do not deny allegience to the state, but because I believe there is nothing superior to Love, and that nothing of value cancome from contradicting it, my duty to it takes precedence over any other.

This is true not only in a situation where the state makes a demand upon me, but in any case where a course of action is demanded that violates my belief. To cite the traditional case, if my wife were attacked by a maniac, or any person bereft of reason and therefore unable to be dealt with reasonably, I would not take his life in defense. I would be willing to use a minimum of non-violent force to restrain him, realizing that he could then be dealt with therapeutically. If he were dead, there would be no dealing with him at all. In this instance, there is no reason to assume I must assent to war. In war, one does not not forgive, but murders his trespasser, and his family and friends as well; the victor then imposes his own order upon the vanquished.

In case of attack by a sane person, or an army, I would use no force beyond the reasonable power of Love. I am fully aware that my practice and knowledge in this is limited, and that I would therefore be liable to injury or death. I accept this as necessary, until the art of Love is fully perfected. Because violence is so dangerous, I do not think there is any excuse for using it. Neither self-defense nor defense of loved ones is sufficient cause for violating the rule of Love. If I were to deny my religion and make an exception in some instance by returning violence for violence, there would be that much less chance for the ultimate worth of my belief to be shown.

There can be no world peace and security without loving forgiveness, and will never be as long as men consider anything more valuable than Brotherly Love. I do not believe the practice of this can be put off into the future, until some less 'dangerous' time. I believe the danger of violence far outweighs the danger of placing one's defense in the practice, even though not perfected, of Love.

I have shown that my religion rests on a loving and peaceful attitude in myself. It may be worthwhile to show a few of the resulting reasons why and how I believe in non-violence.

A strong reason stems from World War II. I believe that a man is, and must be, personally responsible for what he does. The Allied governments expressed this same belief when they initiated the Nurenburg trials for war criminals. They announced that each soldier and citizen was personally responsible for carrying out orders later defined as criminal and atrocious. It is thus impossible for a person to subordinate the demands of his individual conscience to those of the collective state, since he himself, and not the majority of citizens, must answer for every life he takes, every order he follows that results in what the victors can later define as a "war crime." My conscience makes it impossible for me to accept the responsibility for what a soldier must do; therefore I must refuse to be a soldier.

Every war is one of defense, and both sides claim to be defending. Hitler said so, Tojo said so, and we said so. Israel said so and launched an attack [in 1956 --ish]; Egypt said so and fought back; England said so and joined in, along with France whose purpose was also "defense." A country uses the weapons it believes in and has on hand; thus it is likely that this country may be forced to resort for defense to the atomic weapons she has specialized in. In contradiction of this, I will defend myself only as far as Love will allow. If necessary, I would prefer to die for a cause I hold equally as high as that held by whoever chooses to bomb me, or whoever choose to go to war for whatever country he calls his own. I will not violate my religion by seeking to destroy my enemy, or by helping those of my own country whose different belief leads them to bear arms.

I am not willing to be defended, or to defend anyone else, by a series of Nagasakis and Hiroshimas. Aside from being contradictory to Brotherly Love, the price to be paid in such cases makes defense worthless. Some have called our past dropping of the A-bomb, and the possibility that we might drop a bigger one in the future, the lesser of two evils. The greater evil is supposed to be the occupation and plundering of our land by the enemy, and the death of some of our own people. My religion teaches different values. All men are to be loved equally. It is not a lesser evil to kill a Russian than for a Russian to kill an American. Human lives, not nationalities, are involved. If an A-bomb were dropped on Detroit, it would only compound the evil and destruction to retaliate in kind. The only way to diminish the evil is to forgive, and to cultivate Love.

(The above graphic is the logo of the venerable War Resister's League, a pacifist organization founded in 1923. I don't believe my father was affiliated with that group but he did work with the Central Committee of Conscientious Objectors.)
Posted by ish at 11:00 PM