why Mitt Romney won't be president

former massachusetts governor and republican presidential candidate Mitt Romney has many unfortunate traits. at this early stage of the presidential election his primary liability is seen as his religion: he's a Mormon. I wish his primary liability was seen as his utterly hateful anti-gay bigotry. He's gone out of his way to ingratiate himself to the religious right by offering up gays as a political sacrifice. I actually think Mormons are fascinating, and am happy to say it's not his religion that frightens me. But here's a funny story that makes me think, wow, he really has no chance as a Momon to be accepted by americans.

when I was spending a lot of time in the world of Santeria (I am an initiated priest of Obatala, though completely inactive), I knew this lesbian couple in the religion. They were middle-aged, New York social worker types, very borough, and very dedicated to the religion. Half the couple was of Jewish ancestry, half Puerto Rican. As santeros they were very strict, but they had a lovely house in the religion. One of their daughter's was initiated, and they and their house members were very welcoming to me, a white gay man. One was a priestess of Ochun, and the other, of Obatala.

Anyway, they had recently taken a tour out west. They had gone to Salt Lake City. And described their visit to the Mormon Tabernacle. They said it was lovely. The one telling the tale said, "oh yes, we saw the altar." She lowered her voice conspiratorially, and looked left and right. "You know. The main altar. Where they do the human sacrifices."

So yes, a Santeria Priestess who regularly wrung the heads off chickens and participated in numerous rituals where various barnyard animals were offered up to the Orishas, the gods of Santerias (it's a long story), a priestess of a religion often vilified and misrepresented in tabloid media, this priestess actually believed Mormons perform human sacrifice as part of their religion.

Now maybe it is I who is naive, but somehow I don't think so. So I might wish that Mitt Romney's hateful actions against gay people would disqualify him from being a viable political candidate, but I will have to settle for the misconceptions of the ignorant. I guess either way we win.

Too bad about those Mormons though. They seem like nice people.
Posted by ish at 11:28 AM No comments:

I remember when Al Sharpton first burst on the scene. He was divisive, abrasive, and the cause celebre which first made him famous was ugly. I won't mention her name here, it's not necessary. But a lot of time has passed and a lot of water has gone under that bridge. In the 20+ years since those days he's run for president, matured his ideals in the crucible of New York and American racial poltics, and become the leader he once only wished he was. His sense of humor is truly refreshing. His positions, such as his views on gay issues, have truly evolved as he embraced the logic of struggle for justice he has bravely pursued. He's still at times bombastic, still quirky, still abrasive, but I find him so much less divisive and I actually really like him now.

So the news has come, courtesy of an investigative investigation by the New York Daily News that his ancestors were once owned as slaves by ancestors of the late conservative segregationist politician Strom Thurmond. The phrase "only in America" takes on new and bitter meaning. On the one hand, how far we have come. On the other, what a bitter legacy to know this country was built on such cruel foundations. It leaves one speechless to consider the implications of such a revelation. The fact that Thurmond remained a staunch racist and that anyone--ANYONE--in this country in this century supported him is such sad witness to how much is undone in the healing of America's most tragic legacy.

Filmmaker Spike Lee's production company is named "Forty Acres and a Mule" after the empty promise of reparation made to freed slaves after the civil war. The news of Sharpton's ancestral lineage should make Americans work to fulfill that promise...not in the literal doling out of land and beasts of burden but in the uprooting and healing of racism and the ugly remnants of America's slaveowner past. All states must repudiate and apologize for slavery, as Virginia has begun to do. The confederate flag must be rooted out, like the swastika in Germany.

Al Sharpton is an American hero.
Posted by ish at 9:09 AM No comments:

I was browsing around wikipedia, an amazing resource for all sorts of arcane history and was inspired to write the following list of organizations I have been affiliated with. Hmm. Not sure if it's complete. Wow. I'm a weirdo!

some miscellaneous tidbits of "good" news:

While I wouldn't be shocked to learn tomorrow it's all fallen through, North Korea has now been bullied into surrendering energy independence for dependence on polluting fossil fuels and the charity of the west.

I'm heartened to see all the suspicion over the bush regime's pathetic attempt to link Iran to the insurgency in Iraq. Uh, the shi'ites are "our" allies, dude, the government. The insurgents, those would be the ones allied to Saudi Arabia, oh, "our" ally as well. Um, yeah, makes sense. Remember the reichstag fire.

Bombings and assassinations in Lebanon: Um, go watch "Munich" and explain to me why the bombings and the assasinations of the past few years are the work of alleged pro-Syrian elements and not the Israeli mossad?

Imperialist patsy prime minister Howard of Australia says that Al Qaeda would be happy to see Barack Obama win. Hmmm, is Karl Rove vacationing down under? The nerve. As near as I can tell, Obama rocks. Blessed indeed.
Posted by ish at 5:42 PM No comments:

the root of all evil

what do you mean "we"

so this is not a new joke, but it's my favorite one. so now it's preserved for posterity. it dates me, yes, but what the heck, it also has a pretty profound political message.

The Lone Ranger and his loyal sidekick Tonto have been pursued by howling, shrieking Indians into a canyon. bullets and arrows are flying fast and furious.
looking around frantically from the back of his steed Silver, the Lone Ranger
shouts grimly to his Indian friend, "Tonto! I think this is the end! We're
surrounded." Tonto turns to the Lone Ranger and says, "What do you mean 'WE',
white man."

Ah yes. Aside from that, Mrs. Lincoln, how did you enjoy the play? 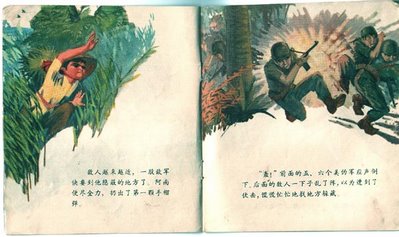 finally the u.s. house of representatives is debating some of the disaster that has taken place in iraq since george bush attacked. I'm torn between being glad that some of the dirty laundry is being aired and being shocked that somehow the internal affairs of another country are now the daily debate in the u.s. government. i wonder what it's like to be a dancing puppet like the iraqi government, especially given their untenable position of one string pulled by the u.s. and the other pulled by iran. In the end millions more people in the world will have even more cause to hate americans.

so here's another scan from a 1971 Chinese children's book. Yes, that shows a little Vietnamese boy throwing a hand grenade and blowing up american soldiers. You would have to hate the united states an awful lot to generate that kind of proopaganda. Saddest of all, "we" never seem to learn.

i restate it: every single death--soldier, civilian, iraqi, american, terrorist, innocent, woman, man, child--is squarely the fault of one man. not osama, not saddam. that one man is george bush. think about it. what are we going to do about it?
Posted by ish at 5:16 PM No comments:

and now for a little violent revolution 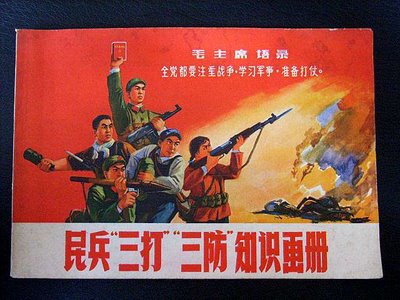 courtesy of the Chinese cultural revolution. as if.
Posted by ish at 5:27 PM 1 comment: