massive upgrade to The Scarlet Menace

God save us from giuliani time

So republican presidential hopeful and would-be dictator of New York City Rudy Giuliani has threatened, in the words of a NYT letter writer, the American public with "voting for him or dying". Apparently despite the fact that 9/11 happened while republicans were in office locally and nationally, he thinks somehow the bumbling tragedy of Bush's Iraq war is actually preventing the so-called terrorists from attacking us again. Such a fool.

He has also now repudiated his own support of civil unions for gay couples. Saying some religious claptrap about marriage being a sacred bond between a man and a woman, this drag-wearing gasbag who has been married three times and cheated on all his wives somehow thinks he's more entitled to privilege than monogamous gay life partners. Such pandering to the backwards red-staters. Such bigotry and hipocrisy. Should American fools actually vote him into office they will deserve what they get.

It's somehow actually shocking to me that Republicans--and half the country, apparently--live in his dreamworld of lies, corruption and hipocrisy.
Me, I choose differently.
Posted by ish at 4:38 PM No comments:

I don't know a lot about Democratic Senator Harry Reid...I'm tld he's socially conservative and not such a progressive guy. But I've been pretty impressed with some of what he's said about ending the Iraq war. Here's my new all-time favorite quote from him, in response to some evil, baiting, dishonest sniping from Vice President Strangelove, er, Cheney:

"Mr. Reid said he was not going to engage in a tit-for-tat with the vice president. “I'm not going to get into a name-calling match with somebody who has a 9 percent approval rating,” Mr. Reid said."

more on the menace 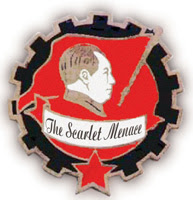 okay, now I have a logo, or a first try at one anyway. ta-da!
shop at The Scarlet Menace often!
Posted by ish at 11:29 PM No comments:

well actually I'm not sure anybody reads this blog except me and the occasional hectored friend, but here's news on the propaganda front.

I've started a modest cafe press store, called The Scarlet Menace. I will be transforming some of my favorite propaganda images to housewares for the new urban revolutionary. or for the nostalgic boomer. Anyway check it out. I make a small profit, you get cool stuff.

If anybody buys any of it I will transform the shop into something bigger. Only one image up now, plenty more to come.
Posted by ish at 9:07 PM No comments:

So when asked about Iran on a recent campaign stop, aging senator John McCain began to sing "bomb bomb bomb, bomb bomb Iran" to the tune of the Beach Boys' "Barbara Ann". this is an international disgrace. apparently this veteran of the imperialist debacle in Vietnam is having fond flash backs to the days he was shot down bombing the heroic people of Vietnam. Sadly, he will no doubt die before being brought up on war crimes charges. If the united states attacks Iran, it deserves anything it gets. I just hope I have time to step out of the way.

meanwhile, John McCain needs to check himself into a rest home and refrain from bloodthirsty inhumane calls to slaughter.

a good day in Baghdad?

so the shootings in Virginia were sad. one gunman, 32 dead, plus or minus. but frankly I'm a little sick of how special Americans think they are.

they marched into Iraq, killed a few hundred or a few thousand people, and by smashing a state, a society, a culture, opened the door to violence that has taken potentially hundreds of thousands of lives. these lives are 100% the fault of George W. Bush, his henchman, cronies, AND the people who voted for him. one deranged gunman? 32 dead teenagers? Imagine what it would be like to live in a country where a foreign country has destroyed everything your know to be familiar about your life, the good with the bad, and caused the death of that many people--at LEAST that many people--every day. Not once every few years, every DAY. where the soldiers of that country have the right with impunity to march into your house, look in your closet, look under your bed, arrest your mother, slap your uncle, shoot at your car while you're out for groceries, kill you, simply because, well, simply because nothing.

dead americans? dead iraqis? I don't see a difference. do you? are you really sadder today, than yesterday? than tomorrow? the campus at virginia tech is peaceful today. and will be tomorrow. Baghdad? Fallujah? Karbala? Ramadi?

okay. so George Clooney--who is a hottie--and Mia Farrow--who is an apparent kook--notwithstanding, I am not convinced that the stories we read and hear about "genocide" in the Darfur region of the Sudan are as black and white as made out. here are my questions.
1. why have well-meaning movie stars become the most important "political" activists on Darfur? what does this say about politics? about americans? do they actually know more on the subject?
2. what exactly do they want to happen? do they want--as first, last, any resort--the u.s. to attack Sudan or intercede in some way militarily?
3. are the numbers of victims of the so-called genocide accurate? what is the population of Sudan? of Darfur?
4. why did the united states bomb the Al Shifa pharmaceuticals factory in the Sudan? was it a "terrorist" factory or a pharmaceuticals factory?
5. what is the relationship of Israel to the Sudan? to Chad? to China?
6. are there exploited or unexploited natural resources in Darfur, elsewhere in Sudan or in Chad?
7. who are the rebels in Darfur? what is their relationship to the u.s.?
8. given apparent Chinese economic dominance in Africa, how does the global competition between China and the u.s. factor in?
9. what did/does the South Sudan Liberation Army, a non-Muslim force, say about Darfur?
10. what does it suggest that near-fascist far-right senator Sam Brownback is allied with numerous liberal spokespeople on the subject?
11. savedarfur.org advocates establishing a "no-fly zone" over Sudan similar to the one the u.s. military maintained over Iraq prior to the unprovoked American attack and invasion. how do they see that enforced?
12. also from savedarfur.org: "Bill Frist, a Nashville surgeon, is a former Senate Majority Leader from Tennessee. Each year he travels to Africa to serve as a medical missionary. This past February, Senator Frist returned to Sudan to see first hand the unfolding humanitarian crisis." That's a pretty misleading way to describe one of the most right-wing politicians in the u.s. ...what is the relationship of evangelical christians and neocolonialist missionaries to this so-called humanitarian issue? do evangelical Christians prosletyze among refugees?
Posted by ish at 11:58 AM No comments: 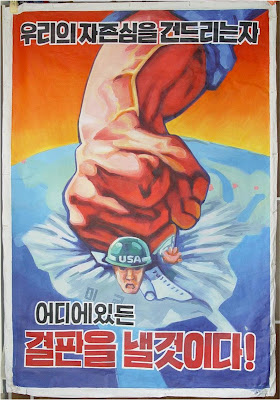 so here's another piece of North Korean propaganda. pretty direct message...without reading Korean it's not hard to imagine what this might say. propaganda is such a fascinatingly visceral art form.

So senator and presidential hopeful John McCain was touring Iraq with a coterie of republicans. They announced how safe it was to walk around Baghdad, and that the open air market was just like an open air market in Indiana.

I was gratified to read in the New York Times an interview with several of the Iraqi merchants. They complained that the notoriety brought by the descent of a hoard of American politicians was likely to make the market even more dangerous than it already is. They pointed out that the politicians considered it safe only while the market was closed off by a security cordon including hovering air support, in the company of over 100 heavily armed soldiers, and that the americans all wore body armor. Nice day for shopping. The Iraqi merchants shook their heads at the ridiculousness of the publicity stunt. The article also mentions one general buying a small $1 rug, paying for it with a $20 bill, and saying imperiously, keep the change. Hmmm, didn't know you could use dollars in Iraq. Can you say, "neo-colonial occupation"?

It's clear that John McCain is walking down the path of lies laid for him by the current administration. Not sure why he thinks that might be a winning strategy but it sure is evidence, as I have long argued, that he's a nutcase.

Finally, I heard a wonderful interview with Dennis Kucinich, also running a sadly hopeless campaign for president. His strong and completely hedge-free (listen up, Obama!) views on the need to withdraw from Iraq immediately remind me why I voted for him back in the 2004 primary. Too bad he seems not to have a snowball's chance in American hell.

Paranoid conspiracy theory of the moment: So the republicans seem to be having such a hard time picking a candidate who's not crazy or tarred by inelectibility. What if they killed off Dick Cheney and appointed a Bush-approved veep who could then be annointed as successor in time for the elections? Keep your eyes peeled. Also keep your eyes peeled for the resemblance between Rudy Giuliani and Count Chocula.
Posted by ish at 1:10 PM No comments: