Barack Obama got 55% of the vote in the democratic party primary in South Carolina. That's pretty damn impressive.

Things are likely to get uglier though. Check out this headline on Time.com

Rejiggers? Are they kidding...has anyone ever seen this word in a headline before? I understand that it's not actually an offensive word but doesn't it sounds like they might as well say "Ni**er Wins" or "Ji**aboo Takes SC". The depth of American racism is gonna reveal itself in a huge way.

Check out this shocking headline from the Hamptons Independent reported on Gawker: "Why I Should Be Your Next President, by Yo Mama bin Barack." This from the enlightened liberal northeast's resort community on Long Island.

On to Super-Duper Tueday.
Posted by ish at 9:10 AM No comments:

So I have become completely fascinated by music blogs. There are a bunch of music-sharing download blogs out there. Some of them are all about people ripping off the system, and it's actually shocking what you can avoid paying for if you look hard enough. I understand now why the record industry is in trouble: it's clear a new money-making paradigm is needed.

I don't approve of downloading just to get something for free. Musicians deserve to be paid for their labor, just like the rest of us, and unfortunately for them they have to share their income with big record companies.

But there are a lot of music blogs that I think are actually doing the artists a bit of a favor, and these are the ones who rip long-out-of-print vinyl that's not currently available on CD reissue and share it with other music heads. There's a big community of "other music" fans out there after '70s jazz and rare groove, lost psychedelic folk, prog rock from all over the world, you name it. I know I spend a fortune on CD reissues, and hopefully some of those profits go off to the artists. But meanwhile, rather than paying exhorbitant amounts for scratchy used vinyl, there's this whole group of people that's all about sharing sounds and rescuing them from obscurity. Hopefully in so doing they're creating a demand that might generate legit CD reissues for deserving artists from back in the day.

Here's some cool links. As near as I can tell, none of these sites link to downloads that cheat anybody.

* My Jazz World
Great lost jazz sides wth an emphasis on the seventies. The blogger has a taste for organ-based soul jazz and smooth-fusion which I don't share, but he also has some awesome rare groove nuggets up for share.

* Loronix
The most amazing collection of Brazilian albums from bossa to MPB to prog to pop, from the 1950s to the 1980s.

* Disco Delivery
Amazing disco site. This guy really researches and analyzes the music he shares. A real labor of love. 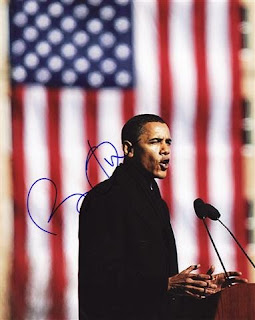 New York's primary in the 2008 presidential election cycle is part of "Super Duper Tuesday" on February 5. After much consideration, I have finally decided to cast my vote for Barack Obama on the Democratic Party ticket, and I urge readers to do the same.

It must be said right off that the Democratic Party is twin partner to the Republican Party, and as long as Americans are shackled to the good-cop-bad-cop routine with which these two corrupt bastions of American imperialism have enforced the will of the mlitary-industrial complex for the greater part of this country's history, we will be repeating an endless cycle of tragedy and disappointment, leading, eventually, to some disastrous collapse of self-avowed democracy to dictatorial despotism. However, someone will win the 2008 elections, and, however sad the fact might be, that person will not be cast up from the ranks of the righteous. That person will not even be a radical reformist in the mold of congressman Dennis Kucinich, nor a third-party critic like former Democrat Cynthia McKinney. That person will be a Democrat or Republican, and I believe that we are all better off--especially given the future composition of the Supreme Court--that that person be a Democrat. In a field of Democrats I believe the best choice is Senator Obama.

Barack Obama is not perfect. As for the global dominance of American capitalism and imperialism, from foreign interventionism including unquestioned bolstering of the State of Israel, to the ridiculous privatization of health and government services, to the tragic repressive waste that is so-called war on drugs, Obama's allegiance to the status quo is writ plainly and clearly. I do not argue that he is a revolutionary, nor even on the order of social heroes of the past who likewise shared a commitment to American capitalism despite their heroic challenges to the worst of American excess like the Reverend Doctor Martin Luther King Jr.

Sadly many of the reasons to vote for Obama are negatives. The biggest of these is to deter NY Senator and former first lady Hillary Rodham Clinton. At this writing Clinton and Obama are engaged in a somewhat bizarre LBJ vs MLK role-playing exercise. If Obama is no MLK, Clinton is unfortunately all too LBJ-like, and that should concern anyone whose priority is the swift removal of US troops from Iraq. The ugly race-baiting spectacle, complete with rambling threats by the former president Clinton himself and somewhat bizarre faux-folksy calls for solidarity with the Clintons from millionaire founder of BET Bob Johnson, reminds me, for one, of the worst of the Clinton years. Having suffered through America's self-inflicted Bushite nightmare I worry we have remembered only the good parts of Clinton's era and not the bad.

Speaking of millionaires, born-again populist, former senator and former vice presidential candidate John Edwards also represents an acceptable alternative to four more years of the Clintons or Republicans, but currently it seems unlikely that his trajectory is anything other than downward.

As everybody knows Barack Hussein Obama is the child of a white American woman and black man from Kenya. His upbringing was anything but typical (for non-Hawaiians or non-Indonesians that is): growing up in Hawaii and Indonesia. He is a lawyer, and a veteran of something he calls community organizing in Chicago. While not in national office at the time, he vocally opposed the US attack on Iraq from the beginning. He can be an inspiring speaker. His calls for change and hope do seem genuine and refreshing, and while I'm not particularly interested in building bridges with Republicans, his promise to unify and heal the sectarianism of the recent past feels like something more than just another election-year political bromide.

Obama does not support gay marriage, and handled the appearance by gospel singer and arguably anti-gay preacher Donnie McClurkin at a campaign event clumsily. But at his appearance at that ground-breaking candidates forum sponsored by Logo months back, I felt what he did say in support of gay civil rights was heartfelt and less equivocal than Clinton.

Obama seems to genuinely oppose the war in Iraq, and seems to raise questions about the whole idea of the "war on terror." But he clearly does not oppose American intervention abroad. His critique of the war is not as solid as that of say, Kucinich, or even perhaps the now-dropped out of the race Eeyore candidate Governor Bill Richardson. But his opposition to the war seems much clearer than that of Senator Clinton, who I believe would prolong and deepen it, much like LBJ did back in the 1960s.

It's widely reported that African-Americans are concerned that Barack Obama is setting himself up for assassination. It's hard to argue with that. The deep deep racism of many white Americans would seem to virtually guarantee that Obama would become a target of violence at some point. One can only pray--and I guess I mean that literally!--that such a fear doesn't come to pass. But it's because of that racism that I think Obama offers the most hope for me.

Harold Washington was Chicago's first--and only, so far--African-American mayor. Chicago was and is segregated in ugly ugly ways. But Washington's tenure, cut short by a heart attack, changed Chicago, and changed Chicagoans, for the better, in ways both subtle and dramatic. While Condoleeza Rice proves there's nothing inherently better about having black faces in government, I believe that Obama offers us the kind of opportunity for fundamental change in attitude, a fundamental blow against racism, that Harold Washington wound up being in Chicago. Jesse Jackson was a flawed candidate, though I worked on his presidential campaign back in the 1980s; my first political steps outside the tiny world of sectarian socialism. Jackson proved to be too complex a figure, too unable to transcend his personal baggage. Al Sharpton was a flawed candidate, and despite the knee-jerk racist reaction he is met with by most white Americans, he made many principled and admirable stands; but his campaign never transcended that of an outsider, like today's Kucinich or Gravel. Racism didn't end with Harold Washington, and it won't end with Obama. Indeed the backlash will likely be ugly. But the hour is late, and every we step we take as a nation so dyed in the wool of racism out of this ugly caldron is a step toward our redemption.

It is unnecessary, I think, to engage in the fruitless argument over whether women or African-Americans have suffered more or are more deserving of fronting our attack against the Republican monstrosity. Let us look to the individuals offering to lead the charge and this time, the man of mixed racial heritage is my choice.

For all these reasons, you can hold your nose, you can cross your fingers, you can apply for an immigration visa to the country of your choice, you can stockpile arms in preparation for civil war, you can redouble your commitment to revolution or to spiritual purity, but the only choice for now, for this dismal reality, is to vote for Barack Obama for president. May God have mercy.
Posted by ish at 4:14 PM No comments: 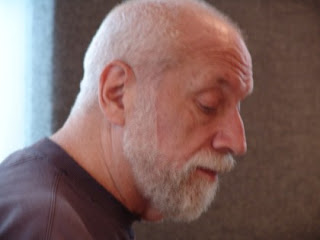 I was browsing through my CD collection yesterday and realized how lax I had been in not noting the passing of one of the greats of American jazz, So here is belated notice of the passing of renowed, possibly under-renowned, 1960s/1970s record producer Joel Dorn, who left this world in December. Joel Dorn was the consummate A&R guy, working with the giants of R&B and jazz at a key point in American music.

He worked at Atlantic Records when it was still a pioneering indie label, and went on to be a champion of independent label jazz in the CD era. In later days he owned now-defunct 32 Jazz--and later Label M--which if you're into rare groove jazz/funk like I am, you will recognize as an incredibly generous and important CD reissue label of the Muse and Atlantic jazz catalogs in the 1990s. Among his sons is Mocean Worker, a groove/jazz DJ who thankfully carries on Dorn's excellent tastes. 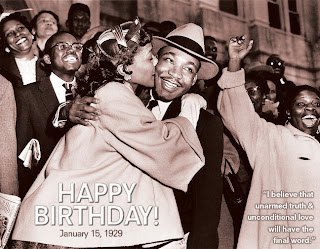 Courtesy of my friend Andrew, here's greeting for the late Dr. King, whose birthday would have been today. Still hard to believe his birthday became one of our monday holidays... thank you Stevie Wonder.
Posted by ish at 10:45 AM No comments:

Barack Takes Iowa, Hillary Takes a Kick in the Pants(suit)

Senator Barack Obama is not perfect. More to come on that later. But wow, delivering a swift kick in the backside to Senator Hillary "Yes to Bush" Clinton (who came in third!), he has won the primary caucuses in Iowa. I think that's cause for celebration. The audacity of hope, indeed.

Below is a link to Obama's victory speech, which is inspiring. Read it here.
Posted by ish at 8:09 AM 1 comment: