Honor for Heroes of the Past 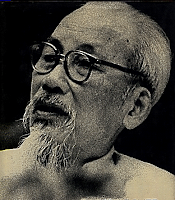 Today, May 19th, is the birthday of two long-gone heroes.

Malcolm X, of course, was the heroic African-American muslim leader who made a long journey from being a petty street criminal to devout muslim to "black nationalist" to a leader with a complex and nuanced view of American capitalism. An amazing orator, he was gunned down in his prime by assassins rejecting his political evolution, including, allegedly, the later minister Louis Farrakhan.

Ho Chi Minh, on the other hand, did not die young. A complex figure, he lead his small nation to stand up against the mightiest powers of colonialism and imperialism in 20th-century history. Successfully resisting French, Japanese, and American domination of his country, he died before the reunification of Vietnam and the route of America's military adventure. While his adherence to Stalin-style communism considerably narrowed the focus of his country's political opposition, his humble nature and heroic leadership showed that destiny was not in the hands of European-American aggressors and their gangster-like local lackeys.
Posted by ish at 8:37 AM 2 comments:

Yes, that's former serious Republican Presidential candidate Mike Huckabee, speaking to the NRA, joking about how funny it would be if somebody tried to assassinate Barack Obama. And also, what a sissy Obama is. Wait til you hear the jokes Huckabee cracks when he visits the American bed linens and rope manufacturers associations. Hil-ar-ious.

Seriously, WTF. What is wrong with this country.

In better news, if my boyfriend and I lived in California we could get married. Yay!
Posted by ish at 11:12 AM No comments:

In an interview with USA today, Hillary Clinton said:

"I have a much broader base to build a winning coalition on," she said in an interview with USA TODAY. As evidence, Clinton cited an Associated Press article "that found how Sen. Obama's support among working, hard-working Americans, white Americans, is weakening again, and how whites in both states who had not completed college were supporting me."

Um, did I really read that right? Why do the following lyrics pop into my head about now....

I was working part time in a five-and-dime
My boss was Mr. McGee
He told me several times that he didn't like my kind
'Cause I was a bit 2 leisurely

A fascinating set of photos, found on an unknown camera, has been released after a 60-year embargo on publication. They're of the aftermath of the US atomic bombing of Hiroshima, and unlike most published photos, show the human aftermath and not just damaged buildings. They're hard to look at, but as we contemplate Hillary Clinton's pledge to obliterate Iran they're a useful reminder that one nation--not Iran, not the old Soviet Union--has used nuclear weapons of mass destruction against civilian targets and that nation is the U.S.A.

The collection can be seen here.
Posted by ish at 7:55 AM 1 comment:

The War on Children. 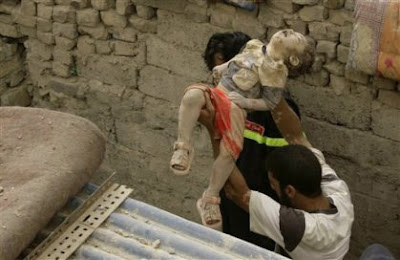 Above, a fatally wounded child removed from a building demolished by a US airstrike in Baghdad. This week.

Below, the "collateral damage" (read: murder) from a US missile strike on an alleged "terrorist" in Somalia. From the BBC:

"We heard a huge explosion and when we ran out of our house we saw balls of smoke and flames coming out of house," Dusamareb resident Nur Geele told the BBC.

"The house was totally destroyed to the ground, also other houses nearby," local elder Ahmed Mumin Jama said.

Dr Ahmed Mahdi at Dusamareb Hospital told the BBC he was treating eight civilians, including women and children, for burns and shrapnel wounds.

"The house that was attacked was a small concrete villa and it has been destroyed," he said. "The adjacent houses which were made from traditional mud were also destroyed. The sight is quite horrific."

One of the women has since died, bringing the death toll so far to 11.

Yessir, proud to be an American. Due process. Right to a fair trial.
Posted by ish at 5:22 PM No comments: