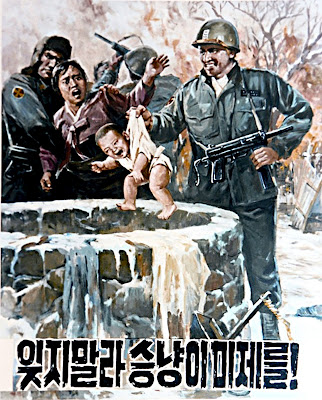 One nation has used nuclear weapons, incinerating thousands in the blink of an eye. And if it is Japan, Germany, and Russia who have the reputation for being the bad guys of the last century, going around and attacking other nations unprovoked and then brutally occupying them, one might want to maintain some perspective and remember who carpet bombed North Vietnam for much of the 1960s and 1970s, who invaded the Dominican Republic in 1965, who invaded Grenada in 1983, and who invaded Iraq in 2003--all more or less if not unprovoked, unthreatened in any real way. And one might want to remember who was behind a multitude of coups and proxy wars in Guatemala in 1954 and the 1980s, Nicaragua in the 1980s, El Salvador in the 1980s, Cuba in 1961, Congo in the 1960s, Iran in 1953, Afghanistan in the 1980s.

What I grew up hearing called "Chinese water torture" (thanks to the Korean war) turns out to have its roots in the Spanish Inquisition, practice at the hands of Japanese militarism, and perfection with hoods and boards at the hands of the Khmer Rouge, is now called "water boarding" with its subtle suggestion of leisure-time recreation. And in the nation that most excels in double plus good euphemistical new-speak water-boarding turns out to be only one of the many prescribed practices of "enhanced interrogation" spelled out in recipe books issued by our former president George Bush's ironically-named justice department.

President Obama has, to his vast credit, opened some of the books on these deplorable inhumanities, shedding a little light on the Bush/Cheney doctrine of bureaucratic inhumanity that lead to our modern day gestapo-esque reality of Abu Ghraib, Guantanamo, Baghram, and CIA black site prisons.

So now we all know, crimes were committed. What will we do about that? Well, apparently not very much, including not even clearly saying it won't happen again. Here's the rub. In his eternal optimism--and I don't actually mean that to sound so harsh--Obama knows that just under half the country doesn't have much of a problem with these crimes. It must be said that half the country doesn't seem to have much of a problem with the rest of us being enslaved to insurance companies, credit card companies, banks, soul-lessly greedy corporations, corrupt politicians, or religious fundamentalists either.

So how does the agenda of change which half the country DID vote for a few long months ago proceed? How now when the mildewing morality of a nation which claims to be free and progressive is revealed to be rotten with stinking and exposed corruption and hypocrisy is Obama to proceed?

President Obama is at one of many crossroads. He, who now controls the predator drones that kill innocent and guilty alike without trial or appeal, who now must choose secrecy or openness, who now holds the keys to the torture cells still stocked with people of unjudged innocence, who now claims to steer the ship of state, can choose not to fight this battle. Having defeated that other half of the country in his election he now hopes to unite us and heal us.

But what if it is not possible to heal that contradiction between the nation that murders at will (and the half of the population that unquestionably supported the actions of Bush and his predecessors in tradition) and the nation that claims to stand for a higher vision?

I want universal healthcare. I want marriage equality. I want economic justice. I want green energy. I want all the promises that Obama has made. But if all of these things are going to be battles, then let the battle be joined now over torture, where the morality is clear. If Obama is going to need more allies in the fight for a new more humane future, let him win them by repudiating completely the past and dismantling its machinery of murder. That intolerant, militaristic, backward, corrupt less-than-half of America is not monolithic. Let them be called out.

The United States has done terrible terrible things. They didn't start with Bush and they didn't end with him leaving office. We will win nothing if at every step we allow the forces of reaction to call the tune, to threaten, merely by their presence, to derail the cause of justice.

The previous administration must be held accountable, and responsible, for its crimes. Whether its judges or bureaucrats or interrogators or George Bush himself, the guilty must be punished. President Obama is wrong to reject that path.
Posted by ish at 10:34 AM 1 comment:

What's wrong with this picture?

This is a photo of Lenora Fulani with NYC Mayor Michael Bloomberg. Bloomberg, who was elected twice as a Republican, recently strongarmed democracy and bribed City Council into letting him run for a third term, against the term limits laws twice voted into law by New York voters. Lenora Fulani is a figure in the Independence Party. Since Bloomberg--at least until last week; apparently he will now ALSO be running as a Republican again--calls himself an Independent and "Independent" sounds like "Independence" and he thought that would be a nice way to appear on the ballot.

The Independence Party is the latest incarnation in a mind-control cult half a step away from such outfits as Scientology and with traceable connections to Lyndon LaRouche. Formerly known by such entities as The New Alliance Party and the Institute for Social Therapy and Research, this shady outfit and personality cult for Fulani and founder Fred Newman, used to haunt the left and progressive movement trying to siphon off disaffected questioning individuals into its near brain-washing psychotherapy programs. They would urge troubled people to attend their therapy sessions with a doctrine saying that "the system" was responsible for people's depression or mental issues and that the solution to personal unhappiness or psychological issues was to join their group and fight capitalism.

Now, apparently capitalism is no longer the enemy. As the left and progressive movements faded, providing a lack of recruits for this cult, the Independence Party drifted rightward, toying with all sorts of unsavory right-wing characters. This unholy alliance between a would-be dictator and a power-hungry personality cult should be a major scandal in this city, but it is not. My question is:

I moved to New York City in 1981. One of my closest friends was a man names Steve Rose. He had moved to NYC from upstate New York, become an RN, and joined the gay activist world with gusto. He joined GAA, the Gay Activists Alliance--in the late 1970s, and was part of the faction of GAA at its end who became sympathetic to the Revolutionary Socialist League, then one of the left groups most active in that pre-AIDS gay movement. Steve was not drawn to the left through intellectualism, through student disaffection at some ivory tower. He became a leftist because his heart told him it was the right thing to do. He chose the RSL because of its unique attempt to combine socialist orthodoxy with a left libertarian spirit and its complete embrace of the nascent GLBT movement.

Eventually as the RSL imploded in those dark Reagan years Steve and I had a falling out. We both moved on, and sadly, Steve joined those first ranks activists to be diagnosed with AIDS. His first over Alberto passed on first, and Steve himself lost his battle with injustice sometime in the mid to late 1980s. The last time I saw Steve was on a street corner. Although a few years before he made numerous sharp and stingingly incisive polemical attacks against the New Alliance Party and their ilk, by then he was defeated. Facing personal demoralization along with the challenges of fighting HIV Steve joined the NAP. When I saw him on that corner telling me of his new allegiance to NAP I saw such despair behind his eyes belying the wooden and rote recitation of how NAP had helped him to see that his problems were not his own, rather the burden of oppression and capitalism. It was heartbreaking to see him so broken, so surrendered to the easy answers of a cult that could do his thinking for him. I grieve that he spent his last years in such company. While brash and not always sympathetic, Steve was a fighter and a real hero of gay liberation. The cult that parasitically attached itself to him, joining the HIV in sucking out his life force, cannot now go unopposed.

Bloomberg's unholy alliance must be exposed, and Bloomberg's Giuliani-like power grab must be spiked.

update: check out Lyndon LaRouche Watch for a lot of details about the Fred Newman cults.
Posted by ish at 9:03 AM 7 comments: