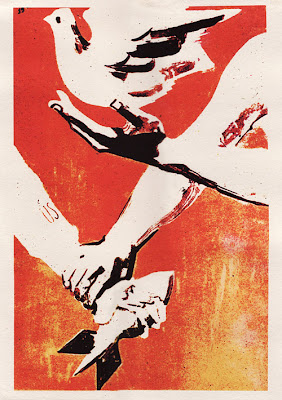 April 30 is the anniversary of the victory of the combined forces of the National Liberation Front of South Vietnam and the People's Army of Vietnam over the United States and its Republic of Vietnam puppets in 1975, as tanks bearing NLF flags crashed the gates of the Presidential Palace in Saigon. This beautiful Vietnamese poster gets to the heart of the matter: vastly outgunned, a determined people defeated the most powerful military on earth and ended a conflict that had cost millions of lives. Human resilience won over military might. We do well to remember that conflict.
Posted by ish at 11:46 AM No comments:

The Meaning of Boston: A Fragile and Threadbare Society Revealed

I've tried to contextualize the events of the past week in Boston as elsewhere. I've put this up first on Kasama threads, crossposting it here.

As everyone knows now, the entire Boston metro area was locked down Friday so law enforcement authorities could pursue a manhunt against suspected terror bomber Dzhokar Tsarnaev, a young U.S. citizen of Chechen ethnicity. The streets of the Boston suburb of Watertown saw parades of black-uniformed paramilitary SWaT teams and armored military vehicles parked at intersections. In unprecedented fashion, mass transit was shut down, businesses were closed, even travel in the northeast corridor was halted.

Just five days before, Tsarnaev, with his brother Tamerlan — killed in a shootout with cops on Thursday night — allegedly dropped off two pressure-cooker bombs filled with BBs and nails at the finish line of the Boston marathon. When the bombs exploded, they killed three people — including an 8-year-old boy who had previously been photographed protesting the racist murder of Trayvon Martin — and maimed dozens more. Witnesses described limbs ripped from bodies flying through the air. While the days between the bombing and Tsarnaev's capture witnessed an orgy of clueless and racist media speculation, false leads and accusations, racial profiling, and even a handful of violent incidents against random, innocent “Muslim-looking” people, there's reasonably strong evidence against the Tsarnaev brothers. The evidence, combined with the circumstances of their final confrontations with police suggest the veracity of police claims against them. As of this writing, the motives of the Tsarnaevs remain unknown to anyone but themselves. Of course all sorts of further details are yet to be exposed, including some alleged history of contact between the elder Tsarnaev brother and an FBI antiterrorism task force.

Repression Laid Bare
8-year-old Marathon bombing victim Richard MartinIf the events in Boston revealed the incompetence of the capitalist media, they also revealed a massive apparatus of state repression. Authorities were able to sift through thousands and thousands of surveillance photos, taped phone conversations, and a massive crowd-sourced information gathering and snitching operation to identify the Tarnaevs before they moved in on them...

Read the whole article
Posted by ish at 6:42 PM No comments:

Fresh off the presses in February of this year, this new stamp and postcard from the Democratic People's Republic of Korea (that's North Korea in popular parlance) honoring the vigilance of the DPRK military. Just in time for this year's Spring sabre-rattling, it shows a hypothetical artillery blow against an attacking American battleship. Designed in glorious North Korean agitprop posterese, this bright and colorful design is part of a series of four, though the only one to visually note whom the Korean military is defending itself against.

Speaking of sabre-rattling, this year's episode is marked by unprecedented amounts of bullshit from the US government and its media parrots. Every news report in the American media is full of talk of "threats" from North Korea. I'm amazed that the US can send high-tech bombers to actually practice dropping bombs over North Korea right in neighboring South Korea, and the North Korean response is called a "threat" with a straight face. I call that self-defense.

The repulsive neoliberal New York Times has even run an OpEd piece called "Bomb North Korea, Before It's Too Late," which calls for going ahead and starting a way. Never mind the genocide. Never mind the previous time, 60 years ago, when the USA literally flattened every city in North Korea and still couldn't defeat the North. What the heck, what's another 3 million lives lost?

Counterpunch recently ran an interview with some unnamed North Koreans. It should be required reading for all the Americans buying into the narrative of North Korea as some kind of crazed renegade bully. (As if a tiny poor country could bully the largest military power on earth). Here's a few choice extracts, quotations from DPRK citizens:

"The DPRK negotiated with the U.S., but the U.S. broke agreements, and increased sanctions five times. When the DPRK would agree to some terms, the U.S. would raise the ante. The U.S. had said we cannot have nuclear power, because we could use it for bombs. We cannot have satellites because the missiles we send them into space with can be used as military missiles. These they these things can have dual purpose, one civilian, one military.  They deny us food because they say it can be used to feed the military. If we kept going along with this, they would say we cannot have kitchen knives because we could use them for fighting.
There are slave states and noble states. Noble states develop their own technological infrastructure, GPS, weather reporting, etc., so need satellites. These days satellites are used for many things. If your country doesn’t have your own technology, you end up a slave state, dependent on other countries.  Noble countries are in control of their own development and have a future.
Maybe without nuclear weapons we could already have been attacked by the US in a war. Now our people can live more peacefully. The people of the DPRK are proud we have nuclear weapons, they are a guarantee of peace.  Only we on our own can safeguard the peace.
The US has over 1000 nuclear weapons in South Korea – nuclear artillery, nuclear missiles, nuclear bombs, nuclear landmines.
The DPRK has called for a nuclear free Korean peninsula, but this call has been ignored. Now that we saw no choice but to develop nuclear weapons to defend ourselves, we are sanctioned. This is a double standard insulting to our people."

Once again, the issue is not whether or not the government of the DPRK is more or less repressive than our own; the issue is whether North Korea has the right to stand up, as a sovereign nation, to provocation from the U.S. To me, the answer is clear, and an unqualified yes.

Margaret Thatcher died today, and celebration is the order of the day. She was a monster: a partner in crime of Augusto Pinochet and Ronald Reagan; she joined Reagan in calling Nelson Mandela a "terrorist." This is setting aside all the horrible things she did to working people in the U.K. Amid the celebration, I did notice something, and this article by Bay Area revolutionaries Advance the Struggle really caught my eye, so I'm reblogging it here. While I'm still working out my opinion on the works of Marxist-Feminist Sylvia Federici (author of Caliban and the Witch), I know quite a bit about witches and this article gets it exactly right. —ISH

Witch Side Are You On?

I dont intend to attack anyone for their word choice, but would like to raise a little bit of consciousness on this word choice of calling Thatcher a “witch” as a form of insult.

Margaret thatcher was the opposite of a witch. By referring to thatcher as a witch, one denigrates the real witches of the late middle ages (and other women whose independence was

slandered by patriarchy as witchcraft) whose genocide (witch hunts) was intimately bound up with the subjugation of the new proletariat and colonizing missions.

The witch hunts culminated in a triumph for the bourgeoisie, in the form of a division of labor at the heart of which was a stark divide between productive labor and reproductive (domestic) labor. Workers outside of the home (predominantly men, but women too) were waged slaves whose productivity was under-valued through the fetishism of commodities (money hiding the unequal exchange of equivalents). Workers inside the home (exclusively women) were not paid at all, the most extreme fetish (illusion) this new capitalist order would produce. At the heart of this illusion that women’s domestic/reproductive work did not merit a wage, was the false belief that women are genetically prone to do this work for free as loving mothers and loyal wives. Male wage earners were given a position, imposed on them and enforced by law, of domestic overseer with all the tools of coercion they might need, from the right to rape to the right to beat “their” wives who regarded as dependents on the man. Thus the male proletariat was coopted by the bourgeoisie in a scheme to keep the total wage bill of that class half of what it should have been. In this sense, all of us male proletarians have a duty to honor our sisters as pillars of the class at every available opportunity. Part of that is learning the history of women as workers inside and outside the home. That history includes the heroic chapter of witches’ resistance to capitalism at the very dawn of its existence. [the book Caliban and the Witch is a good place to start]

Margaret thatcher was a traitor to her gender. Witches were the most loyal members not only of their gender but also of a far reaching pan-european anti-capitalist/anti-patriarchy movement from the 1300s-1700s, that is, during the period of capitalism’s maturation as a world system.