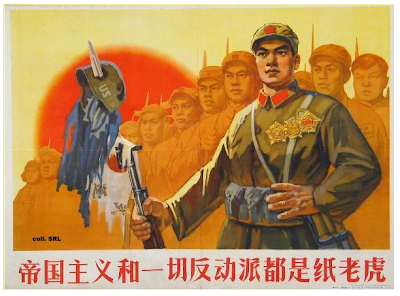 I'm not sure when this one is from, but I'm guessing ca. Korean War. A Chinese People's Liberation Army hero holds a bayonetted rifle; strung on the bayonet are a Japanese flag, a Kuomintang (Chinese nationalist) flag, and a US helmet, signifying China's serial victories. It's convenient for everybody to "forget" that the Korean war was really a war between the United States and China acted out on the stage of Korea. It's also convenient to forget that nobody actually "won" that war.
Posted by ish at 8:31 AM 2 comments: 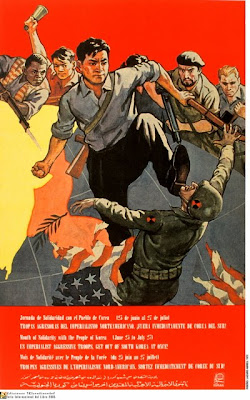 Here's an early 1970s poster from OSPAAL, the Cuba-based Organization for the Solidarity of the Peoples of Asia, Africa and Latin America. The caption: "US IMPERIALIST TROOPS, GET OUT OF SOUTH KOREA AT ONCE!"

This is certainly not particularly subtle propaganda: as the US soldier falls backward, kicked off the globe by an armed Korean civilian, he even drops his UN olive branch. The requisite multi-national solidarity contingent looks on, bayonets fixed.

I'm fascinated by this kind of art, and will be posting examples of it here from time to time. Hopefully I'll find something meaningful to say about it. This kind of fantasy socialist realism is sort of the equivalent to sword & sorcery's Frank Frazetta, for the anti-imperialist set, of course.
Posted by ish at 10:52 AM No comments:

The face of racism 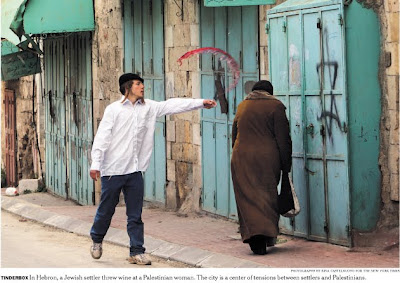 This picture was in the Times today. It shows an Israeli "settler" casually assaulting a Palestinian woman in Hebron, on the West Bank. It reminds me of those pictures from the 1950s and 1960s of white crackers casually spitting on black civil rights marchers in the south. Simply horrifying.
Posted by ish at 5:58 PM 1 comment:

Disappointed at President Obama's apparent failure to immediately fulfill many of his campaign promises in the sphere of LGBT rights, gay organizations have hastily coalesced around a new March on Washington for this October 11, 2009. The march is called "The March for Equality," and has been organized without the coalition-building and platform-exploration that marked the previous efforts. Although I proudly attended all of the previous national gay marches on Washington starting in 1979, I will not be attending this one.

Today, September 12, a right-wing white racist demonstration descended on Washington to express its opposition to President Obama. Below are three photos from this demonstration, which reportedly drew a hate-filled racist mob tens of thousands strong. In these photos, plain for all to see, are expressed shocking racism and ignorance, profound intolerance, and active calls for the violent overthrow of our first African-American president. I have neglected to post the photos that show signs saying things like "We came unarmed...this time" and "where's my gun." 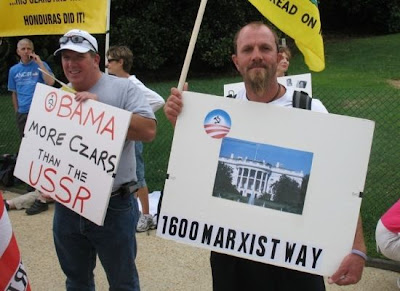 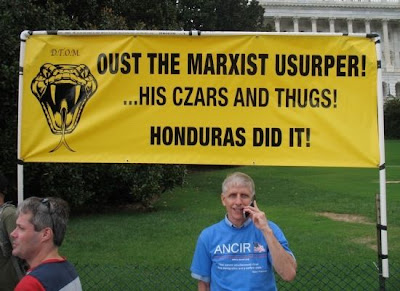 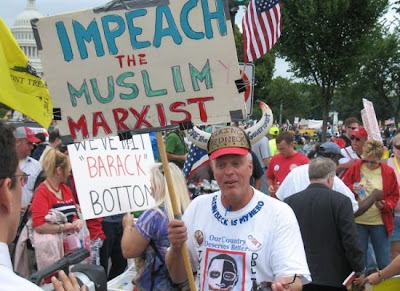 The gay community has been drifting rightwards for some time. I don't know if it's the ill-advised campaign for marriage equality (which I support abstractly), or its surprising embrace of Hillary Clinton's more right-wing campaign during the democratic primary, but today's gay activists seem self-obsessed, narrow-minded, and strategically adrift.

I am disappointed that everything we hoped and prayed and voted for about Obama last year has come crashing into reality. The intensified war in Afghanistan, the difficulty of healthcare reform, economic recovery for the banks and corporations without recovery for regular people, and the failure of LGBT legislation to advance have all been wakeup calls about the strength of right-wing resistance to the will of the people expressed last November. In some of these spheres I disagree profoundly with Obama; but in others I cannot fault him.

The gay establishment has been quick to suggest Obama's failures on LGBT advancement are evidence of dishonesty and betrayal. Blogs have been filled with angry rants suggesting he is bigoted and beholden to right-wing Christians.

However, the summer of discontent over healthcare reform--frankly an issue I place in higher import over "DADT reform" (allowing gays and lesbians to serve in the armed forces--who the FUCK would want to do THAT!), ENDA (employment non-discimination), hate crimes legislation, or ending DOMA (the vile Defense of Marriage Act signed by Bill Clinton enshrining hatred of homosexuality into law)--has shown a massive not-yet-violent civil war waging in this country between the forces of white racist ignorance and right-wing reaction on one side, and the vast majority of regular people of all colors and sexual orientations on the other.

Now is not the time for the lesbian and gay community to take to the streets against Obama, effectively swelling the ranks of the wrong side of this social and cultural civil war. Although it might be argued that the demands of the October 11 march are not right-wing like the demands of this weekend's racist lynchmob dress rehearsal, I believe this distinction will be ultimately lost. I think it's also fairly guaranteed that the October 11 march will be overwhelmingly white, thus further edging the consciousness of a rightward drifting community away from what should be unifying themes of social justice.

After the tragic victory of Prop 8 in California, repealing marriage equality in that state, it was suggested that this defeat for gays was the "fault" of California's black population. While statistically later debunked, this notion has stuck in the white gay popular imagination. Obama's complex position at the time--clear opposition to Prop 8 combined with opposition to gay marriage in favor of full civil equality expressed as domestic partnerships--has confused gay activists.

Quite aside from these concerns I think this march is also not going to actually do any favors for its avowed agenda. I believe it was the last MOW I went to that was overwhelming dominated by the gay lobby group "Human Rights Campaign." The HRC is known for advocating for LGBT rights without ever using the words "gay" or "lesbian." NONE of their hundreds of thousands of placards for that last march mentioned our identity openly. HRC is assimiliationist in the worst way: seeing equality marked by the number of cocktail parties they're invited to. It is ironic that the people behind the current march initiated their plans with a posture of militancy and outrage. Now that their organization is under way, their sloganeering is equally timid and closeted, and their fundraising is marked by some peculiar efforts to stay within certain tax codes. While quite a few LGBT organizations have now issued paper endorsements of this October 11 MOW, I am not convinced that the force of the internets will be enough to replace the organizing efforts and grass-roots outreach that marked previous efforts. As a principal organizer of a failed potemkin-village mass demonstration for LGBT rights in 1984 (a story I will tell someday), I know that enthusiasm is not a replacement for organizing skill and vast numbers of ordinary people.

There are many battlefronts for gay activists: fighting marriage equality repeal attempts in the states where equality has been won, for example. At best the MOW is a diversion away from these, and at worst a massive misalignment of our community. I'm not suggesting that our community be silent about its own demands, but I am very clear that we must do so in manner with long-term strategic benefits.

If the Obama adminstration is defeated by the right-wing white mob with the assistance of the gay community, that mob will thank the gay community only briefly for its assistance before it offers us our own special kick to the curb.
Posted by ish at 6:53 PM No comments:

Advice for President Obama on his healthcare speech

Letter to the Whitehouse on healthcare

"Last year, in the only opinion poll that actually mattered, President Obama received the overwhelming mandate to reform our health care system. Many of us knew that compromises would have to be made; in my case I understand that a single-payer government health service like most of the world's progressive nations already have is not on the immediate agenda. But having made this compromise, it's important for our President and his administration to understand that this is the line drawn in the sand. The "public option" must not be abandoned. It represents our only hope to take a step toward justice for the un- and underinsured. Please don't take this crucial option off the table. It is vital to many--like me--who are marginally employed and frantic about our inadequate healthcare, at the mercy of rich insurance companies, rising payments, and rising costs.

The compromises have already been made--the Public Option MUST remain part of healthcare reform!"
Posted by ish at 5:55 PM 2 comments: