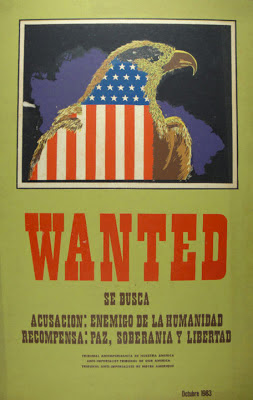 From 1983, a poster from the Cuban "Anti-Imperialist Tribunal of Our America." Bearing completely still-relevant text, it reads:

In a country where the media narrative routinely suggests down is up and up is down,  it's worth remembering how warped American perspective is. Things look different from outside our borders. U.S. foreign policy isn't quite the gift to world progress it's made out to be.

In compiling the beginnings of a reading list on the Occupy movement, I ran across this brilliant passage:

"The American population, the 1% of the world, is wrapped in a skin filled with memory we must shed. Memory of false historical narratives, of manipulations we knowingly uphold, of dreams about “making it” and of an existence that seems to have stopped evolving. These false memories require our collective insomnia. We are not at the end of history, as some would have us believe. Our current society does not represent the best we can do. There is nothing inherent to human beings that allow some to achieve financial success by their own volition and others to remain stagnant in reaching an acceptable quality of life."


That's by Sandra Mae Nurse, from the article "On Losing Fear and Complacency" in issue 2 of the Occupy Wall Street theoretical journal Tidal, downloadable here.

"Anti-Americana" is a series featuring Anti-American propaganda art here at The Cahokian.

The Benghazi Circus: Is There Anything There?


Question: Why has there never been a coup d'etat in Washington, D.C.?
Answer: Because there is no U.S. embassy there.

Not a new joke, but appropriate in the light of this week's congressional hearings into the "terrorist" attack on the U.S. consulate in Benghazi, Libya, last September 11. Republicans are up in arms, trying to implicate President Obama and now former Secretary of State and presumed 2016 presidential candidate Hillary Clinton in something resembling a scandal. Increasingly shrill, Republican politicians and conservative pundits are claiming that there's something here worse than Watergate, the actual scandal back in the early 1970s that revealed illegal activities in President Nixon's reelection campaign.

It's obvious the primary Republican motivation is "gotcha," a continuation of their base, and often deeply racist, campaign against the country's first black president. We're all used to seeing how when Obama says "yea," they say "nay." It's a tiresome spectacle, especially because Obama's underlying positions are often much closer to those of the Republicans than anyone cares to acknowledge. But it seems to me clear that the Obama administration is indeed engaged in a fairly clumsy attempt to muddy the waters over the Benghazi incident. There's some leaked e-mails showing an attempt to get the administration talking points just so, and an effort to explain the odd spectacle of Obama's sleazy U.N. diplomat Susan Rice being shuttled around the talk show circuit to soft-peddle what was, from their perspective, a minor diplomatic disaster.

Of course there's the standard Republican hypocrisy. One need only recall the unheeded message "Osama Bin Laden determined to strike inside the U.S." from a presidential briefing in August 2001, that George W. Bush was never seriously held responsible for; or the hundreds of large and small attacks on American diplomatic properties that have taken place in the last couple decades. And there's little discussion of Republicans cutting back on the budget for diplomatic protection. So in one sense, scandal, schmandal. This is a routine Washington sideshow. These are all sleazebag politicians, Republicans and Democrats alike, looking not for truth but looking to make — or cover up — hay.

But I think it's a fair question to ask why the Obama administration stuck to a trivially unimportant talking point, that the Benghazi consulate was spontaneously attacked during a protest against a crude anti-Islamic American film rather than attacked as part of a planned action by enemies of the United States.


Question: What do you call the destruction and burning of a U.S. embassy?
Answer: A good start.

I think two things happened in Benghazi that the administration would not care to admit. First, that post-NATO regime change Libya was full of people not so apparently grateful for U.S. intervention; and secondly that the so-called U.S. Benghazi Consulate was something more than just a diplomatic installation. Indeed it seems that one of the objectives of the Benghazi attackers was to liberate prisoners who were being held at the consulate. The question must be asked: Was the Benghazi Consulate actually a CIA black site?

As the exposure of the nest of spies in Tehran back in 1979 by heroic Iranian students revealed, so-called American diplomatic installations are actually and commonly hotbeds of espionage and subversion. For decades and decades all over the world, U.S. embassies were hosts to coup plotters and schemers to manipulate foreign governments to the will and interests of the United States. In the post-911 era of the so-called war on terror, it would surprise noone to learn that the web of CIA black sites — off-the-public-grid facilities where suspected "terrorists" could be held, interrogated, tortured, or worse, often with the assistance of local repressive secret police agencies — would include American facilities in hotspot countries like Libya. There's already a public record of the CIA working with repressive governments, ironically including Libya's Gaddafi who it eventually helped overthrow, and Syria's Assad, to interrogate suspected terrorists. It would seem to me shocking and counter-intuitive to think the Benghazi consulate was NOT such a blood-soaked station of international repression.

The new Libyan government was embarrassed by the attack on Benghazi (the state-department socialists of the North Star blog, big supporters of the NATO intervention, even ran an embarrasing apologia for the attack.) With the establishment of a U.S. drone base in neighboring Niger, one suspects that spying eyes will be quick to foil any future "terrorist" attack against U.S. interests in Libya.

The real lesson of Benghazi is that U.S. imperialism has a proven record of covert and open manipulation of foreign governments. As far as I'm concerned, the destruction of the consulate there was another case of chickens coming home to roost. To me the real outrage is that other U.S. diplomatic facilities elsewhere all over the world are engaged at this very minute in acts of subversion, control and exploitation. That's what imperialism does, and that's not a truth one should expect to come out of the congressional Benghazi circus.

Perhaps there's some perverse pleasure to be taken in watching corrupt, war-mongering politicians in Washington bloody each other: I for one have no interest in choosing between creepy racist Republicans and Hillary Clinton/Susan Rice/Barack Obama. But ultimately scandals like this one are ugly spectacles that demoralize and depoliticize people. One day we'll put all those buildings in Washington, built by forced labor of black slaves, to good use.

Hands (and Drones) Off Assata Shakur!

Crossposted from Kasama. Since I wrote this last night, Malcolm X Grassroots Movement has already reported that a giant "wanted" billboard has gone up in Newark, New Jersey. What an obscenity! Assata has been living peacefully in Cuba for THIRTY YEARS. What does it mean that she has now been labeled a "terrorist"?

Today the Obama administration's FBI added black liberation fighter Assata Shakur to its list of "Most Wanted Terrorists." They doubled the million-dollar price on her head; and she becomes the first woman on the list. Fortunately Assata Shakur is living free in Cuba after being liberated from a federal penitentiary in 1979, but it's clear her life is in mortal danger. Labeling Shakur a "terrorist" is a declaration of war against all dissenters and revolutionaries, and sets her up for murder at the hands of the state with complete impunity. It's also evidence of the continued bullying relationship between the United States and its anti-imperialist Caribbean neighbor, Cuba.

If Assata Shakur can be labelled a terrorist, so can anyone who has raised their fist against the empire.

Assata Shakur is a survivor of the vicious COINTELPRO campaign that attempted to smash the Black Panther Party and its offshoots in the 1960s and 1970s. Dozens of heroic black liberation fighters were murdered outright or sent away to prison for long sentences: the U.S. government was determined at any cost to smash a movement that refused to play by liberal rules. She was repeatedly framed with apolitical crimes she had nothing to do with; she went underground but was arrested in 1973 when the car she was a passenger in was attacked by New Jersey State police; and was very seriously wounded while trying to surrender.Democracy Now quotes a letter Shakur wrote to the Pope on the occasion of his visit to Cuba in 1998:

"At this point, I think that it is important to make one thing very clear. I have advocated and still advocate revolutionary changes in the structure and in the principles that govern the U.S. I advocate an end to capitalist exploitation, the abolition of racist policies, the eradication of sexism, and the elimination of political repression. If that is a crime, then I am totally guilty."


But what Shakur is not guilty of is terrorism. Indicted ten times by the government for supposed crimes ranging from bank robbery to murder and kidnapping, Shakur's only conviction was her final one, by an all-white jury, stacked with family members of cops, who ignored the copious medical evidence that showed she was shot while she had her hands held up high. This accusation of "terrorism" reflects the new reality of U.S. imperialism under Bush and Obama: with drone technology it's a license to kill.
In Occupy/Ocupemos Sunset Park, we closed each of our General Assemblies by linking hands and reciting Assata's words from her 1973 statement, "To My People":
"It is our duty to fight for our freedom.
It is our duty to win.
We must love each other and support each other.
We have nothing to lose but our chains."
Assata is our hero. We must be vigilant, and protect her and the freedom-fighter legacy she represents.
Check out Common's "Song for Assata" on youtube:


HANDS AND DRONES OFF ASSATA SHAKUR! 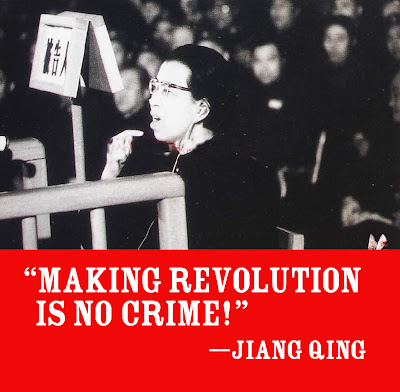 In honor of May Day, known as International Workers Day, here are the words of Jiang Qing, last wife of Mao Zedong, at her trial as a member of the "gang of four" in 1980: "Making revolution is no crime! It's right to rebel!"

This is appropriate for us in the U.S.A. where, in full Orwellian fashion, even though this country is the birthplace of May Day via the Haymarket martyrs, it's referred to as "Law Day," or even more grotesquely, "Loyalty Day."

In the words of two great revolutionaries, "The Communists disdain to conceal their views and aims. They openly declare that their ends can be attained only by the forcible overthrow of all existing social conditions. Let the ruling classes tremble at a Communistic revolution. The proletarians have nothing to lose but their chains. They have a world to win." - Karl Marx and Frederick Engels