Thanks to this super cool inauguration photo you can see that conservative supreme court justice/sexual harasser/right-wing stooge Clarence Thomas thinks that the occasion is perfect for dozing off.
Posted by ish at 1:24 PM No comments:

From the website of the President of the United States:

Support for the LGBT Community

"While we have come a long way since the Stonewall riots in 1969, we still have a lot of work to do. Too often, the issue of LGBT rights is exploited by those seeking to divide us. But at its core, this issue is about who we are as Americans. It's about whether this nation is going to live up to its founding promise of equality by treating all its citizens with dignity and respect."

Check out whitehouse.gov, and welcome and thank you, President Barack Obama.
Posted by ish at 1:11 PM No comments: 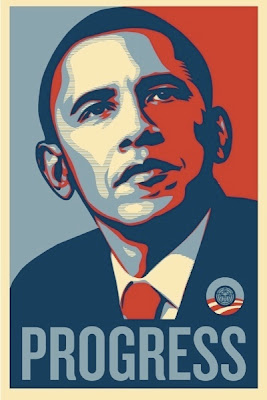 Tomorrow Barack Hussein Obama will be inaugurated as president of the United States of America.

Never in my lifetime have I seen this. Anti-war candidates lose. Civil rights candidates are admired but lose. But not this time. A decent and intelligent young man is about to become President of the Empire. Our nation is being offered on a silver platter a chance to atone for some of the wrongs it has wrought. Surely, no matter what happens next, this is progress.
Posted by ish at 7:47 PM No comments:

Episcopal Bishop Gene Robinson delivered a beautiful prayer before yesterday's Inaugural Celebration Concert at the Lincoln Memorial. Bishop Robinson is openly gay, causing the bigots in his church to begin the process of secession from the world Episcopal church in order to build a counter-church built around the hatred of gays. Anyway, it's a beautiful prayer, unfortunately not broadcast as part of the Cable TV version of the event:

"Bless us with tears...
Bless us with anger at discrimination, at home and abroad, against refugees and immigrants, women, people of color, gay, lesbian, bisexual and transgender people.
Bless us with discomfort � at the easy, simplistic �answers� we�ve preferred to hear from our politicians, instead of the truth, about ourselves and the world, which we need to face if we are going to rise to the challenges of the future
Bless us with patience...
Bless us with humility...
Bless us with freedom from mere tolerance replacing it with a genuine respect and warm embrace of our differences, and an understanding that in our diversity, we are stronger.
Bless us with compassion and generosity...."

It's worth going and reading the whole thing. I didn't watch the entire concert; I caught three numbers: John Mellencamp doing "Aint that America" which was beautiful if it made me feel as old as Mellencamp looks; Herbie Hancock, Sheryl Crow and Will I. Am doing Bob Marley's "One Love"; and Josh Groban, Heather Headley and the Gay Men's Chorus doing some patriotic song that made me weep uncontrollably. Ah emotion. 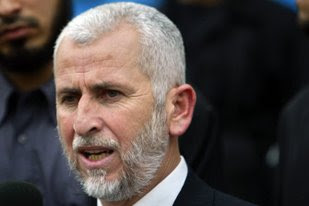 Terrorists today assassinated the Interior Minister of the freely elected government of the Palestinian Authority. Said Siam, representing the Islamic Liberation Movement, or Hamas, was killed in an attack along with his brother. Since the terrorist assassins were the Israeli Defence Forces, world governments failed to condemn this murder and obvious violation of international law. Minister Siam and his brother had not been charged with any crime.

WHERE IS JUSTICE?
Posted by ish at 3:29 PM No comments:

Email ThisBlogThis!Share to TwitterShare to FacebookShare to Pinterest
Labels: Palestine, stop the israeli massacre of the palestinian people, terrorist assassination

Terrorist Sympathizers Loose on the Streets of NYC

How easy it is for these people to rationalize murder. Well, there's two politicians who will never get a vote from me.
Posted by ish at 10:44 PM No comments:

Here is an entire article with pictures and quotes about the Israelis going out to watch the mass murder:

""Look at that," she shouts, clapping her hands as four artillery rounds pound the territory in quick succession. "Bravo! Bravo!""

Found this link on Angry Arab.
Posted by ish at 9:16 PM No comments:

Email ThisBlogThis!Share to TwitterShare to FacebookShare to Pinterest
Labels: murdering butchers, stop the israeli massacre of the palestinian people, Zionism

Their morals and ours 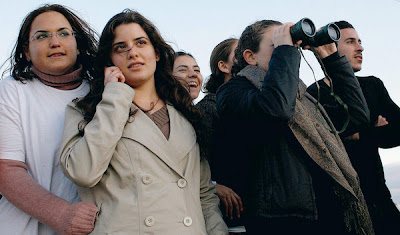 From The Angry Arab News Service: Arabs will see this picture, and they will remember it. They will take note that when the Israeli terrorist army was butchering Palestinian women and children, Israeli "civilians" stood and watched cheeringly, while sipping their beverages. "A tower of white smoke rose from the northern Gaza town of Beit Hanoun after another Israeli bombardment Monday morning, and a half-dozen Israelis, perched on a dusty hilltop, gazed at the scene like armchair military strategists. Avi Pilchick took a long swig of Pepsi and propped a foot on the plastic patio chair he had carried up the hillside to watch the fighting. "They are doing good," Pilchick, 20, said of Israeli forces battling Palestinian militants in Gaza, "but they can do more."" 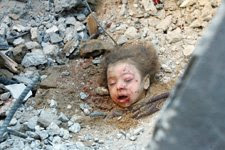 Oh yes. This is a closeup of what made them laugh. The heart numbs.
Posted by ish at 2:39 PM 1 comment:

a voice of reason amidst the bloodbath?

Shockingly, the first acceptable article I've read in the MSM on the attack on Gaza is from Haaretz. By Gideon Levy.
Posted by ish at 4:07 PM 2 comments:

Email ThisBlogThis!Share to TwitterShare to FacebookShare to Pinterest
Labels: gaza, murdering butchers, stop the israeli massacre of the palestinian people 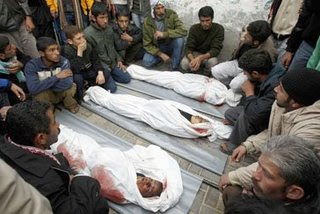 Pictured above, the Hamas military machine.

I weep for the world. The Israelis are murdering butchers.
Posted by ish at 5:10 PM 1 comment:

No Happy New Year in Palestine

In order to assassinate one Hamas leader--without trial, without jury, without verdict--the Israelis murdered everyone in his block: men, women, children. Such terrorism and collective punishment has not been seen since, I will say it, the terror of the Nazis in Europe. Confronted with the murder of these children, the Israeli unapologists say, "we blame Hamas for the deaths of civilians." Disgusting.

In brighter news, the Cuban revolution has now survived fifty years, despite repeated provocation and blockade from the mightiest imperialist nation on the planet, which is also its very bad neighbor. Long may the flag of Cuban freedom wave.
Posted by ish at 12:07 AM 2 comments: