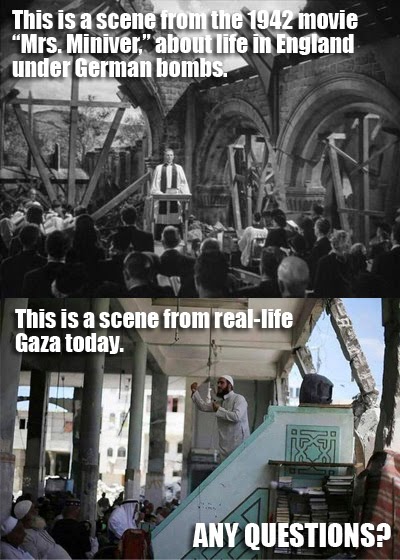 I saw the bottom of photo of Muslims in Gaza worshipping in a bombed-out Mosque on the eve of the Eid festival and was reminded instantly of the climactic scene in the 1942 wartime movie "Mrs. Miniver" where the local priest holds service in the bombed out local church and calls out the names of the dead.

Today comes the news that on Eid itself, an Israeli drone attacked and killed children playing in front of Al Shifa Hospital in Gaza. Despite the whining deflection, it's clear Israel knows what it is doing. It is intentionally murdering children because it doesn't believe Palestinians are fully human. If this sounds familiar, it's because it is.

ARE THERE ANY QUESTIONS?

Email ThisBlogThis!Share to TwitterShare to FacebookShare to Pinterest
Labels: Fascism, gaza, stop the israeli massacre of the palestinian people

Again, today, I was lucky. And yet my eyes are filled with tears. 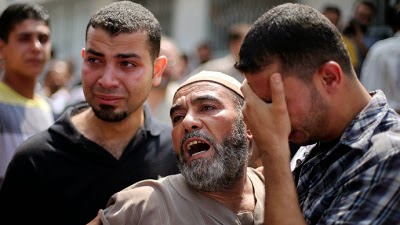 I spent my morning on the computer. Although my extended unemployment would allow me to sleep until noon or stay awake all night, I try to keep to a fairly normal human schedule. I wake up, I listen to the news on the radio. My cat leads me to his food dish, so I open a can. I breakfast at my desk. I log into my computer, checking Facebook, and a few other sites.

I have been relishing the coverage of Alakhbar English, a secular left-wing site out of Beirut. Their coverage of the Israeli pogrom on Gaza is righteously outraged, and their posture untainted by the immorality of Saudi or Qatari paymasters. A few days ago they put up a page: "The victims of Gaza: A list of Palestinians killed in Israel's ongoing assault." It keeps a running tally of the casualties, printing their names, their ages, and the brutal circumstances of their murder. It's hard to read; overwhelming. The passing of each precious life coolly noted, each child, woman, man, each martyr to the cause of living their own lives documented one last time.

I shared the link on Facebook. I noticed the metadata that Facebook shows with the post was outdated, reading "Updated July 22 at 6:45 pm: The Gaza health ministry has confirmed the deaths of 627 Palestinians so far in the besieged..." and then it drops off. Yet when I shared the link this morning, July 24, the article itself read a total of 746 deaths. I paused to consider what I had done yesterday, while the electrons of metadata caught up with the typing of a careful webmaster. I had not died. I had not had my home bombed, with or without warning. I had not had my sister, my mother, my father, my children, my friends killed, or maimed. I was not sent screaming into the street in mortal panic. I was very very lucky in my apartment thousands of miles away from, no, I won't call it a war...thousands of miles away from that massacre. What cosmic accident plunked me down here, privileged only to bear distant witness?

This morning I took care of tasks in the warmth of a humid, overcast, but quiet Brooklyn day. I worked on a flyer for a brilliant Palestine solidarity action tomorrow night, the guerrilla transformation of a benefit for the IDF into a benefit for medical aid for Gaza. My cat begged for some of my lunch. I drank iced coffee, followed by some delicious sour cherry juice from Turkey. I'm looking at the clock noting the time I must leave the house to be at tonight's Gaza solidarity rally in downtown Manhattan.

I checked back on my Facebook share this afternoon. The metadata stayed unchanged. I clicked through to the link.

"Updated July 24 at 7:00 pm: The Gaza health ministry has confirmed the deaths of 784 Palestinians so far in the besieged strip since Israel began its relentless assault on July 8. Among those killed, at least 175 were aged 18 or younger."

Thirty-eight more precious lives taken, like that, in the moments it took me to avoid doing my laundry. I couldn't hear the screams, the cries, the crashing of bombs and bricks, I couldn't smell the smoke, the sulfur. I couldn't save any lives, stop any killing. I couldn't offer solace to anyone's unimaginable grief. I couldn't shut up the voices on the radio making grotesque rationalizations for their even more grotesque actions.

My rage seethes, leaving a hollow pit in my chest. I feel impotent, powerless.

This morning certain people I knew online spent time blaming the Palestinians for their own deaths, and in those hours more Palestinians — more people — were actually and literally killed by a calculating, cruel enemy.

Five hours. What did I do this morning? Again I was very lucky.

Everybody I know is okay today, going about their business.

Yet why are my eyes wet from tears?

Something awful is happening right this moment. Shut your eyes, turn away, it's still there, even if you can't see it.

It's time to do something. 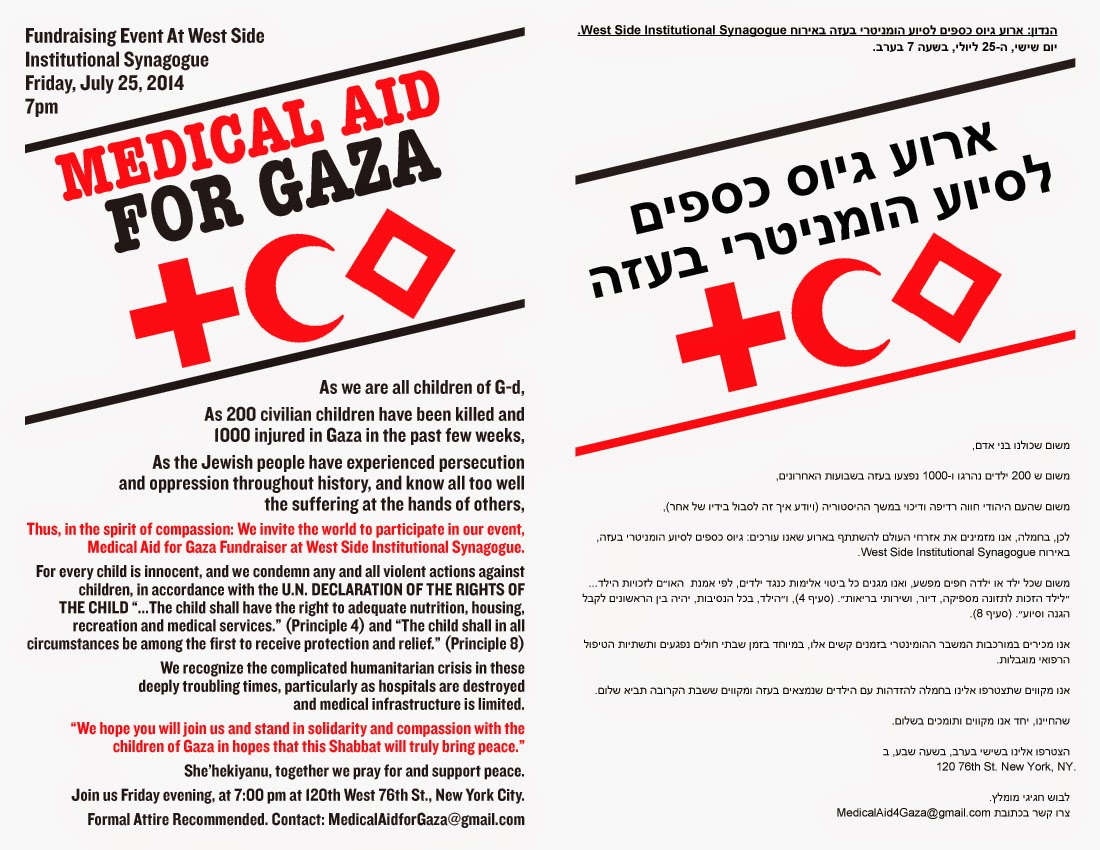 Email ThisBlogThis!Share to TwitterShare to FacebookShare to Pinterest
Labels: gaza, my life, Palestine, stop the israeli massacre of the palestinian people, stop the murder of innocents 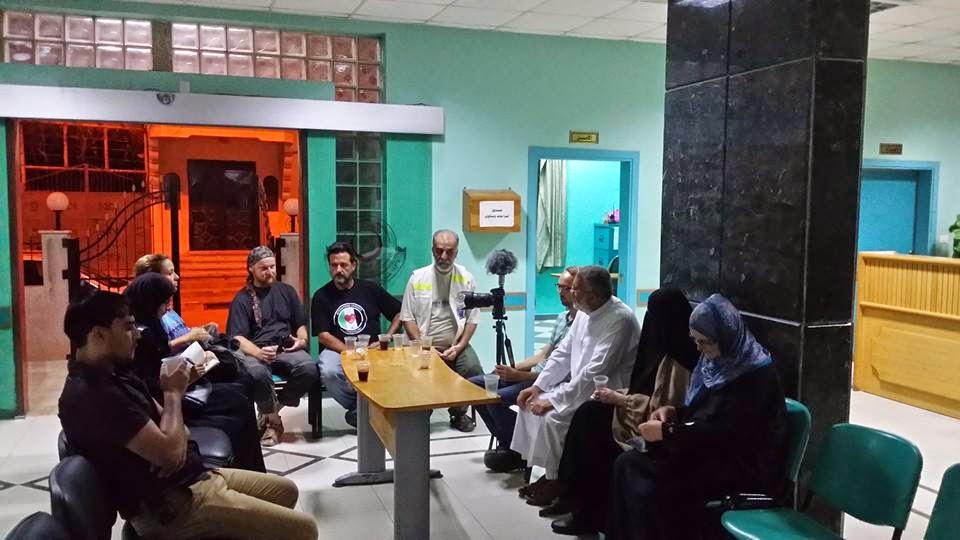 This haunting photo shows volunteers sitting in the lobby of Al-Wafa orthopedic hospital in Gaza, acting as human shields after the hospital received warning shots from the IDF. A day or two later, the hospital was leveled by Israel.

At the start of the Israeli offensive against Gaza I promised my comrades I would write something about Gaza. As the days went by I found myself paralyzed. The rage at what was unfolding flowed through me, but the words jumped around inside my head like little wounds that wouldn't congeal.

I have never had such a difficult time writing anything before in my life. The past week has filled me with grief and despair. Beyond the horror of what's being done to virtually defenseless human beings is my sense of disgust at the people rationalizing the murder of children: all these defenders of Israel, whether politicians or just heartless regular people. But what's happening now is so important. This is a test of our humanity.

We as human beings cannot afford to look away from what is happening. It's ugly but it's really happening. The question is what will we do about it. So this is my article on the tragic affairs in Gaza. Finally last night the words came together and I was able to finish the article I had promised at 1 in the morning. I'm proud of it. I hope you'll read it.

Israel and its supporters have crafted a brutal narrative absolving themselves of all guilt for the mass murder they are committing. From the Israeli government, and the legions of Zionist agents spouting officially approved “hasbara,” or “explanations” in the media and on the internet, down through the echelons of politicians in countries far and wide — here in the US including conservative and liberal alike — we hear that Israel is just “defending itself” and “trying to prevent civilian casualties.” Nothing could be further from the truth.

Email ThisBlogThis!Share to TwitterShare to FacebookShare to Pinterest
Labels: gaza, my life, Palestine, stop the israeli massacre of the palestinian people, The US Loves War 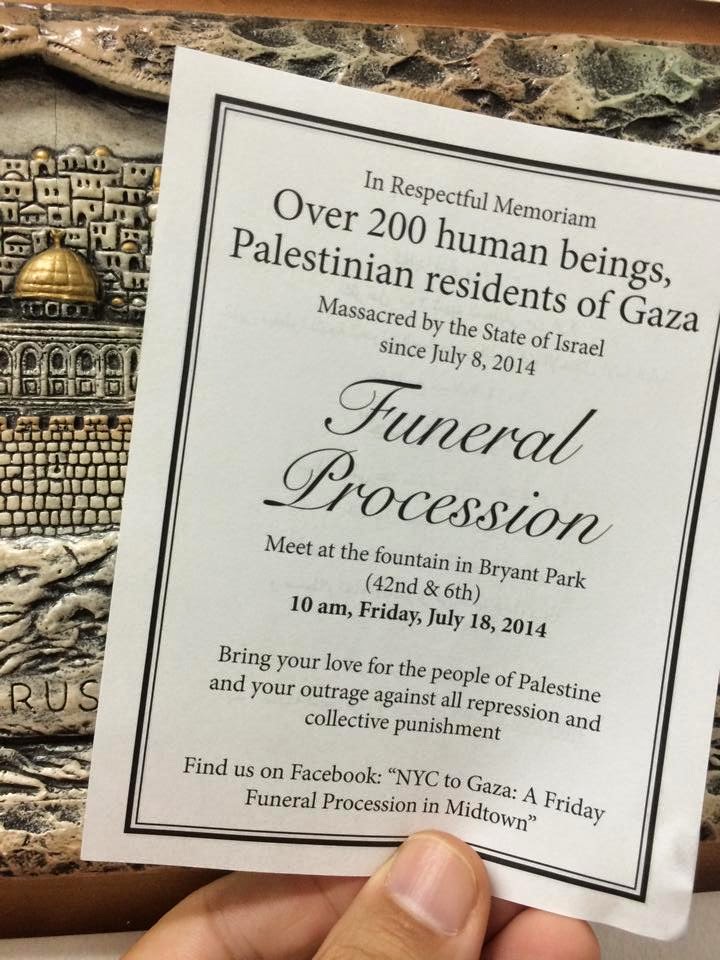 Activists who cut their teeth in NYC's Occupy Wall Street movement are organizing a "Funeral March" in solidarity with the people of Gaza on Friday. There's a facebook page for the event. I'm proud to have contributed the flyer design for the event. There's even a version in Arabic. The event is being organized by the in-formation "Direct Action Front for Palestine." I'm almost paralyzed with rage at the brutality of Israel's action; I'm really glad to be a part of an action here in New York.

Because somebody needs to say it 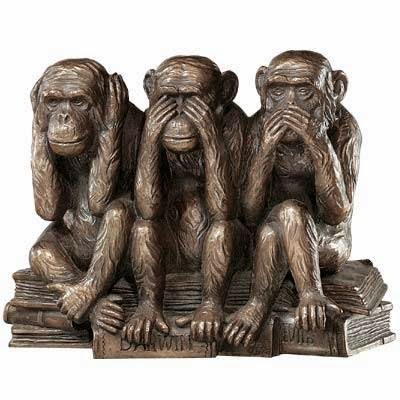 Trigger warning, I'm just gonna say something and not argue it out: sometimes life is really fucking rough. Capitalism sucks. Get the fuck over it and do something about it, or not. Stop treating people like assholes for also being imperfect. If you can't handle something, walk away. Also TRIGGER WARNINGS ARE REACTIONARY NARCISSISTIC BULLSHIT.
Posted by ish at 2:08 PM No comments:

About that Supreme Court Ruling 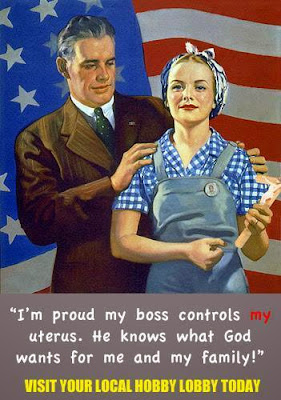 I've written a quick piece on this week's wretched Supreme Court ruling on the Hobby Lobby  and women's right to healthcare. It's entitled "Supreme Court to women workers: 'Make me a sandwich'" and it's over at Kasama. It begins,

The religious beliefs of business owners are more important than the health of women workers. That was the gist of a ruling out of the US Supreme Court on Monday, on the last day of the court's annual session. The court pretty much told women they should put up with whatever their bosses think is best for them, because the bosses have "sincerely held" beliefs about what is best for the health of their female employees.

In a familiar 5 to 4 vote, the court divided along conservative and liberal lines, with the court's three female justices leading the dissent. The ruling was on a case brought by the Hobby Lobby, a chain of craft-supply stores run by right-wing fundamentalist Christians. Forced by Obamacare to offer standardized health insurance to their employees, Hobby Lobby's owners objected to having to cover birth control expenses, supposedly against their religious beliefs. No allowances for the religious beliefs or non-beliefs of the covered employees were made, and, ironically, the Hobby Lobby owners raised no objection to insurance coverage of erectile-dysfunction drugs like Viagra. Women's gynecological health was completely trivialized as something entirely subject to whim. Previously, religious organizations were granted exemptions to birth-control coverage; this ruling was the first to extend those exemptions to “family” or “closely-held” businesses. Hobby Lobby may be family-owned, but it has almost 600 locations and over 20,000 employees. The ruling is also considered a blow to Obamacare, though in truth it just seems to make make it even more obvious what a pathetically pale imitation of actual universal healthcare Obamacare actually is.


Read the whole piece and let me know what you think!