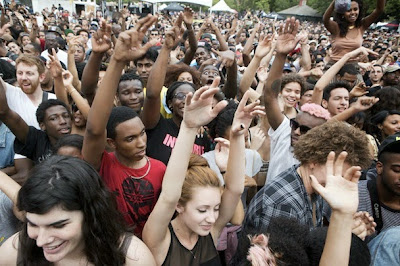 I have a couple new pieces up on the Kasama site.


"Today women are a significant part of the revolutionary movement: whether in the rural regions of India where armed women Maoist rebels challenge Indian capitalism (photo at top), or in the mass movements of the squares from Egypt to Wall Street, or in the spheres of theoretical exploration and debate necessary to take the communist movement to its next stage, women's voices are a crucial part of grounding the struggle in the reality of experiencing and challenging oppression. Revolutionary sisterhood is indeed powerful. Let's see what it can do next."

But what I'm really happy with is a short survey of some of my favorite radical songs. "Urban rebel music subverting your earwaves" takes a look at a handful of songs from Jill Scott, Ursula Rucker, Erykah Badu, Boots Riley and the Coup, and Welfare Poets. Faithful readers of The Cahokian will recognize a couple of these: I've written about the Rucker song and about Erykah Badu before.

I've combined a little bit of cultural critique, music appreciation, lots of song lyrics, and music clips and videos to discuss some surprisingly radical songs outside the more expected realms:


"When people start talking about radical or political music, I'm always surprised how the topic of conversation rarely moves outside the genres of hardcore head-banging punk or earnest sing-along folk. Sometimes talk moves on to the well-worn populism of mass-appeal pop-rock, the Springsteen/Mellencamp/Fleetwood Mac tunes so beloved by bourgeois politicians trying to put something over on voters, and there's the counterpoint of classic hip-hop with its righteous anger against cops and sometimes problematic derision of women and gays. Without disparaging any of these rich genres of music, I want to recommend some really great and really radical tunes from genre-busting urban musicians who sometimes defy easy categorization but whose visionary art is something that revolutionaries can really embrace."

There's some really great songs discussed. The Jill Scott number "My Petition" is a must-listen, and it really is amazingly subversive. The article was set off by re-listening to this song while riding the bus and paying attention to the lyrics. I hadn't noticed before how slyly Scott hooks you in to a critique of America while assuming at first she's talking about her love life. There's a song clip provided. Check it out!

I've also written a few short introductions for re-purposed content on Kasama. You can follow my postings there at this link. 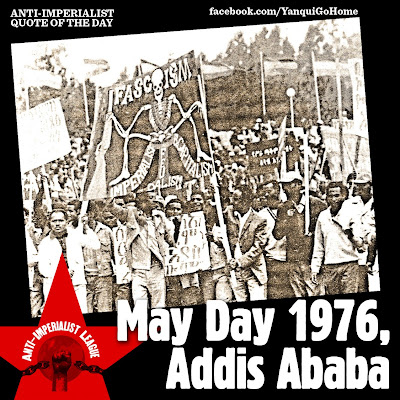 Finally let me put in a plug for my daily work at the "Anti-Imperialist League" on Facebook. Every day I've been posting a picture with a first-person quote from a huge spectrum of revolutionaries. Each Saturday I post a quote about a little-known or forgotten episode of rebellion.

It's been really educational and rewarding. I've come to realize the importance of letting people speak on their own, and seeing how much traditional history actually disparages the record of oppressed people themselves. I don't find myself agreeing 100% with every analysis of imperialism offered, but the people featured, a worldwide mix of women and men, are all actual fighters or theoreticians against empire. And I've been able to feature some of the struggles that have always interested me, like the tragically brave Ethiopian People's Revolutionary Party (EPRP) May Day rally of 1976 featured in the graphic above.

My goal is to continue the anti-imperialist quote of the day project for at least an entire year.

Remember the Charge of the Light Brigade! 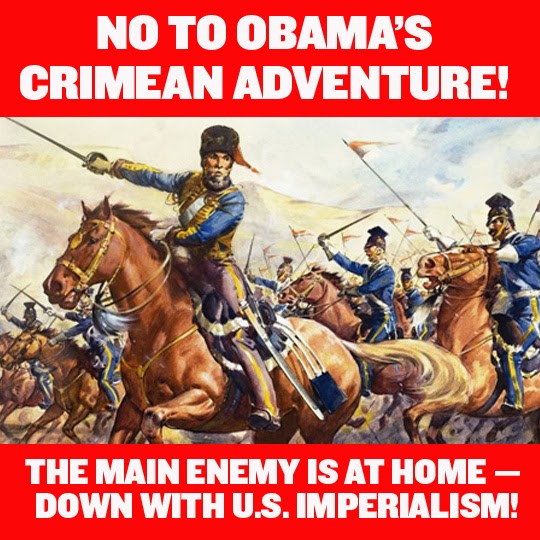 In a war between Russian and US imperialism, the only side the people should be on is their own.

President Obama got on TV last night to say that there would be "consequences" to Russian military involvement in Crimea. While the Ukraine is certainly a complicated issue what with the involvement of a host of fascists and right-wing fake communists, opposing American saber-rattling must be key for those of us in the United States.

No to Obama's Crimean Adventure! The main enemy is at home — Down with US imperialism!