so I don't have a lot to say on this subject, except the obvious. george bush expects people to believe that his agents will testify on the fired federal attorneys issue only behind closed doors, not under oath, and with no record. such utter contempt for the american people. he belongs in jail, as does alberto gonzalez, karl rove, harriet myers, dick cheney, and his entire administration. after they rot in american jail for a while then they can be sent to the hague for prosecution as war criminals. enough!
Posted by ish at 3:49 PM No comments: 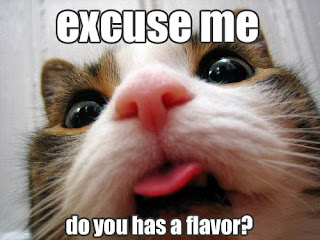 swing the cuteness meter over to high, it's lolcats. yeah, no bitching about politics, wars, injustice, or the weather today, cuz cute cute cats are here! thanks to gawker for ruining my reputation and pointing out this uber cute site with its very own syntax and unbelievably kute photos of kittinz and katz. I could look at "excuse me do you has a flavor" all day. yeah, I'm sick. One day I will blog about the backyard cats, tentatively named Willy, Pickles, Scooter, Fraidycat, and Garcia. But I would really have to discuss Henry and Jimmie first, and I have some pride left. Not lots, but some.
Perhaps I can redeem myself by urging contributions to the kill-free shelter where I got my current roommates, the Brooklyn Animal Resource Coalition. Their website seems to be down today but you can find it on the web.
Posted by ish at 4:25 PM No comments:

you senators can go fuck yourselves

Okay, sad to report that both Hillary Clinton (who I really dislike) and Barack Obama (who I really like) have massively equivocated on their response to General Pace's remarks. Both senators/presidential candidates refused to say "homosexuality is not immoral" when asked directly to comment on General Pace's statement. Both candidates chose to duck and focus instead on whether it was appropriate to inject personal beliefs into government policy. Both senators have issued somewhat conciliatory clarifications, but neither has said what they need to. Apparently it's okay to take lots of money from gay people, to say to our faces that they support us, but then refuse to stand up for us when we are not the only audience. Hillary, you're beyond redemption. This is probably strike 347. Obama, this is strike 1. Careful. That poster isn't staying up in my window when you get to 3.
Posted by ish at 9:20 AM No comments:

senator of the moral?

I was reading in the gay blog Towleroad about the varying responses to u.s. general Pace suggesting gay people are "immoral" and should therefore be excluded from the military. Excluding, for a moment, the obvious question of what the hell kind of morality is that that approves of killing arab children, women and men at will, but opposes human identity, (and for that matter why on earth gay people would WANT to join the military) I'm happy to hear NPR's favorite republican presidential candidate Sam Brownback show his true colors. Brownback has endorsed Pace's ideas and lauded his courage for expresssing his moral convictions. So I wrote Brownback a note on his website. It's a little wimpy. But here it is.

Dear Mr. Brownback:
I have never counted myself one of your supporters. But even I am surprised you would go to the depths of endorsing General Pace's characterizing gay people as "immoral" and lauding him for the courage of his convictions. As a gay man who had no choice in my hair color, eye color, skin color, or sexual orientation, I am hurt that you, in this day and age, would condemn so many people as "immoral". These are backwards, mean-spirited ideas. God creates us each one to be the special individual we are, and that means some of us are gay and some of us straight. Hold whatever politicsl positions you like; oppose whatever you disagree with: I can accept these even as I remain in disagreement with you. But I cannot, and hope the American people cannot, sit by idly while you, a senator of alledgedly all the people--and there are many gay people in Kansas--cavalierly sit in God's chair issuing condemnations and judgments. You owe gay Americans an apology.

I left out the nasty parts floating in my mind. Brownback's politics are slightly to the right of the late Ayatollah Khomeini and I'm actually shocked at how nicely he's treated by the press.
Posted by ish at 5:59 PM No comments:

So speaking of human sacrifice, according to CNN:

Mayan Indian leaders have vowed to "spiritually cleanse" an ancient site in Guatemala after U.S. President George W. Bush visits on Monday as he works his way through Latin America on a seven-day, five-nation tour.

Apparently the Mayan elders are concerned that Bush will be bringing along too many evil spirits. Perhaps they can smell the same sulfurous fumes that Venezuelan leader Chavez smelled. I can certainly smell them here in NYC. I recommend copious amounts of copal, a resin which is well-known in Central America and Mexico for its spiritually cleansing properties.

So yes, even the remnants of a culture which once practiced human sacrifice are finding Bush and his etheric coterie too horrifying. Perhaps this is because the Mayans had the wisdom to abolish human sacrifice, while Bush still practices it. Daily he offers up the blood of young Iraqi and American men and women to his evil gods. May the day come soon when all people learn the wisdom of the Maya and abolish this new human sacrifice.

I'm going to go burn some copal right now.
Posted by ish at 12:38 PM No comments:

I'm going to say it.

These people, they all deserve what they get. There are other choices, other paths. Choose an alternative.
Posted by ish at 5:54 PM 1 comment: 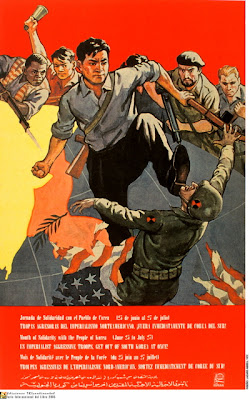 so I'm fascinated by anti-American propaganda. maybe it's just my mood. here's an OSPAAAL poster I just bought. this poster is gently suggesting U.S. troops leave South Korea "immediately". North Korean stamps also have some amazing propaganda images. I'll post some of those later.
Posted by ish at 9:13 AM No comments:

stop the planet, I want to get off

apparently I am an alien who was kidnapped by earthlings and raised among them. however, now I'm hoping the mothership returns to pick me up soon because I'm no longer finding my anthropological studies of earthling behavior very interesting. it seems that earthlings, and a closely related subspecies, republicans, have values, experiences, and identities quite different than my own. I'm grateful to the mothership and the brave alien scientists who placed me here for making sure that the food, water, and atmosphere here on earth was compatible with our own back home on the planet, well, whatever it's called, but they failed to check for other toxic incompatibilities.

I watched an episode of American Idol. Untalented narcissists caterwauling and whining. Each time I saw someone's so-caled singing praised I wondered how my own idea of actual musical talent could be so different than what America--hmmm perhaps I shoud bring back Amerikkka--seems to enjoy. Surely on my own planet singing is pleasant and tuneful: this alleged talent is apparently overly influenced by some earth-based viral contaminant.

Then there's Bravo TV. Often entertaining. Well, like watching a train wreck or a bad accident on the freeway. The Real Housewives of Beverly Hills. Workout. Top Design. Who ARE these people? How did they get their heads trapped so far up their own sphincters? Do these people live their whole lives thinking absolutely....nothing? Perhaps global warming has overheated their brains and caused irreversible damage?

I could go on and on. I'm not sure if the alien overlords read blogs, but if you do, dear overlords, please send the Mothership soon, and hurry! Beam me up!
Posted by ish at 8:00 AM No comments: