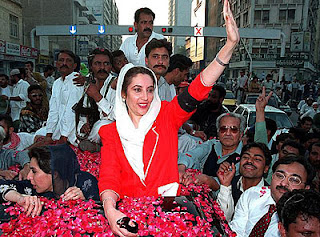 Benazir Bhutto, former prime minister of Pakistan, was assassinated today. A complex figure, she was a populist hero in a culture where most heroes are men. She was an aristocrat, a child of Pakistan's history, and a leader of debatable integrity. But she was undeniably courageous, and, seizing control of the wheels of history, she returned to her country from exile at a key moment to provoke George Bush's pet dictator Musharraf in a time of vulnerability.

While she was hardly an anti-imperialist, it's increasingly clear that Pakistan's dictatorship--fully supported by the Bush regime--is among the puppet masters of so-called Islamic terrorism in the region. The complicated conflict in Afghanistan is perpetuated by the Pakistani military, and nurtured by the corruption of Bush.

Thus while Bhutto and Bush toyed with alliance, her triumphant return to Pakistan and its cinematic welcome parade (which also ended in violent tragedy) pushed her to a position of confrontation with Musharraf and Bush. Her death now at the hands of unknown assassins must be laid at the feet of Musharraf and Bush and their cold alliance of power and brutality.

The world has lost a great woman. J'accuse George Bush: you did this.
Posted by ish at 8:57 AM No comments:

The Tragedy of Victor Jara

This song always makes me weepy, and I just discovered this haunting video on youtube. Victor Jara was a revolutionary Chilean singer who was murdered after the Pinochet coup of 1973. He was actually the biggest Chilean pop star, and his murder at the hands of the US/CIA-backed junta should have shocked the world. This song, "Vamos por ancho camino" (We're going by the wide road) is a poetic metaphor for the Chilean socialists' doomed strategy of popular front; uniting all the segments of society behind their broad banner, and tragically opening the door for the coup and the right-wing resurgance which lasted decades. The song, with its Andean flutes and percussion, recorded long before they became cliched, evokes hopeful innocence, belied by its future soon to be drowned in blood.

May Victor Jara always be remembered.
Posted by ish at 12:55 PM 4 comments:

Canadian jazz pianist Oscar Peterson has died at the age of 82. He was immensely prolific, with an instantly recognizable virtuosic style. My own favorite Oscar Peterson recording is his version of Tom Jobim's "Wave" with a swinging string arrangement by Claus Ogerman, from Peterson's heyday in the late 1960s. It's on Motions and Emotions one of his albums for the legendary German MPS label. He will be missed!
Posted by ish at 8:16 AM 2 comments:

...from my draq queen pal Candy. And yours truly is along for the party! May one of those presents be for me!
Posted by ish at 3:41 PM No comments:

Email ThisBlogThis!Share to TwitterShare to FacebookShare to Pinterest
Labels: holidays, my life

Did Gay Rights lose in Venezuela, too?

I heard a snippet on the BBC this morning and have been trying to find info on it. One of the constitutional amendments in the packet of changes defeated in this weekend's referendum was apparently an amendment adding "sexual orientation" to the list of anti-discrimination protections in Venezuela's fairly new constitution. While I had mixed feelings about Chavez's proposal to eliminate term limits, I think he's a real progressive. In the barrage of anti-Chavez propaganda dominating even "liberal" US media, it's discouraging but not surprising to see this element un-discussed. Because in truth, progressive socialism would be good for Venezuela just like it would be good for the U.S.

Chavez is not the enemy of freedom, the U.S. and its CIA are. I'm glad to see Chavez is on the side of equal rights for us gays.
Posted by ish at 1:22 PM No comments: