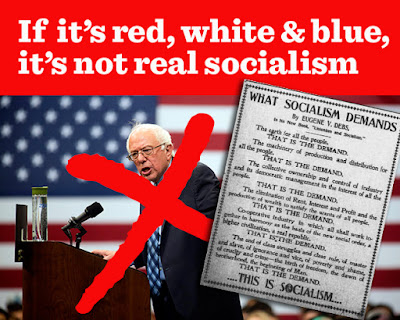 Bernie took a drubbing in the NY state primary yesterday, despite the mobilization of much of the NYC left. I am in the strange position of thinking it's great that so many regular folks are open to some of the things Sanders is saying, while actually horrified that so many leftists have set aside their principles and historical legacy to dive in to the Democratic Party. I think long term that nothing good can come of Sanders’ redefining of socialism and revolution to mean something akin to the right wing’s corrupted definition. Anyway, hopefully this meme gets at the difference between Bernie Sanders’ professed socialism and the real socialism of someone like Eugene Debs, who was unequivocal in his opposition to capitalism itself. Nobody on the left should be waving those stars and stripes. Point that fucking bloodsoaked imperialist banner somewhere else.
Posted by ish at 10:38 AM No comments: 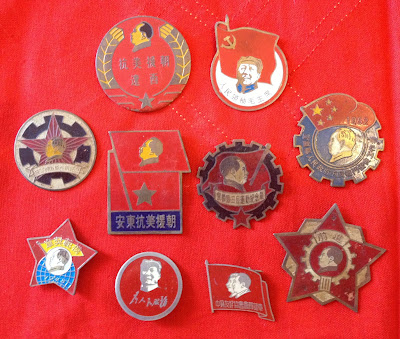 I bought my first Mao badge when I was a teenager in the early 1970s. Since then I have accumulated a collection of several hundred. I thought I'd share a few of my favorites. I'll post up more in a few days. These badges were produced for decades, starting in the 1940s before the whole of China was liberated. The heyday of Mao badges was the Cultural Revolution, 1966-1976, when millions of varieties were manufactured for mass consumption: most of these were the red and silver "bicycle reflector" type made of aluminum, none of which I'm actually showing today.

The first two photos here show photos from badges of the early period, stamped out of steel and enameled. I'm told that these early pins have been heavily counterfeited, which surprises me not one bit, so who knows if this are legit originals, I don't. Notable here is the pin above with the silhouettes of Mao and Stalin, the one below dated 1948, and the one below showing a Chinese volunteer bayonetting a red blob labelled "America," issued in solidarity with the DPRK, clearly a composition like the "take that" stamps I have featured here The Cahokian. 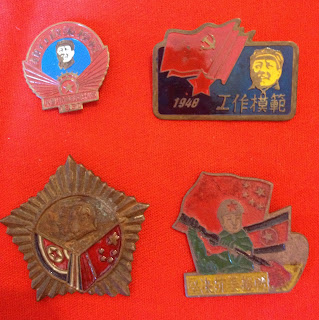 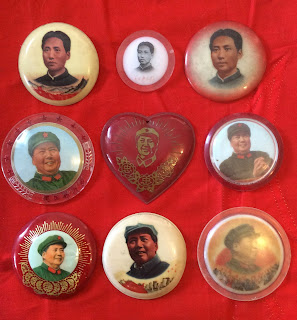 This final batch of badges are all plastic: the heart and two of the white pins are soft, squishy, puffy vinyl.
Posted by ish at 10:05 AM No comments: 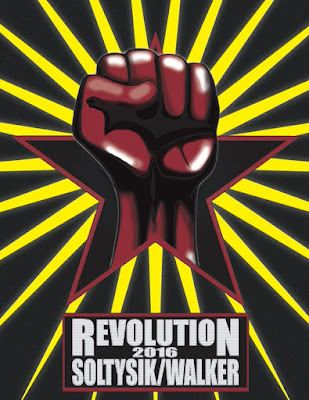 In my old age I have become convinced that voting is generally a meaningless enterprise, a false form of democracy that amounts to being forced to play a loser's game. As anybody who has read my blog for a few years knows, this is not the position I have always held: indeed my tempered enthusiasm for Obama 2008 is quite evident in the earlier pages of this blog. Let's just say I have learned my lesson.

So I'm back to thinking about the symbolism of voting. I have been extremely favorably impressed by the modest electoral campaign of Mimi Soltysik and Angela Walker of the Socialist Party USA. I'm not going to make a thorough analysis right now of their campaign, of the checkered history of the SPUSA, or even of the reasons I believe organizing for fake socialist Bernie Sanders represents a major strategic mistake, betrayal even, but I would like to urge my readers to check out the #REV16 campaign. Whether or not they are officially on the New York ballot in the fall, this is the ticket I will be casting my meaningless vote for in November. I am skipping the primary, condemning both Sanders, Clinton and of course the frightening trio on the Republican side.

Soltysik and Walker seem like really great, dedicated activists, down to earth working class folks, and their campaign is being run on a platform far to the left of the Green Party; and unlike other leftist candidates with the possible exception of Mary Scully, they are running full up against the Sanders social democratic juggernaut. The Party of Socialism and Liberation and the Green Party seem both to be engaged in a soft endorsement of Sanders until his probable defeat in the primaries: #Rev16 is engaged in no such ridiculousness, confronting the issues from a revolutionary point of view up and down the line right now.

Voting won't bring revolution, but standing up for what you believe in and making a statement sure doesn't hurt. Meanwhile, the fight for socialism is in people talking to each other, organizing, preparing, sharpening our tools. #LessVotingMoreRevolution
Posted by ish at 6:13 PM No comments: