Tomorrow: Another World Is Possible 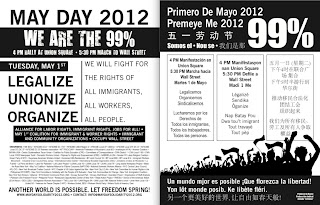 Here's the flyer from the citywide May Day coalition for tomorrow's historic rally and march. See you on the streets!

May Day Is Almost Here! 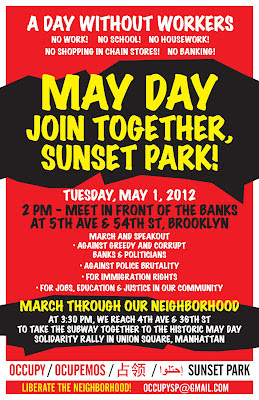 Saturday my local Occupy group, Occupy/Ocupemos Sunset Park, is going to hold an outdoor General Assembly in Sunset Park itself, instead of inside the church parlour we usually meet in. After the GA we'll be having a parranda, a kind of moving rally to build support for May Day action, down the main drag of the neighborhood. As the poster above shows, we have a full plan for May First, starting with a local march, and then a trip to Manhattan for the humungous city-wide rally and march starting in Union Square. Very excited about all of it, though I know the day after it will be time to take a deep breath and take a longer gaze ahead.

It's been an exciting month, and one of the things that surprises me is how despite the fact that I actually have quite a lot to say, I'm finding the responsibility of doing political organizing in the real world holds me back from casually engaging in too much story telling or polemicizing here. But as certain events unfold, the time will be right to present them here eventually.

Anyway, thanks for sticking with me. What are YOU doing on May First?
Posted by ish at 10:43 PM No comments:

Yes, Helen Keller DID Nail It 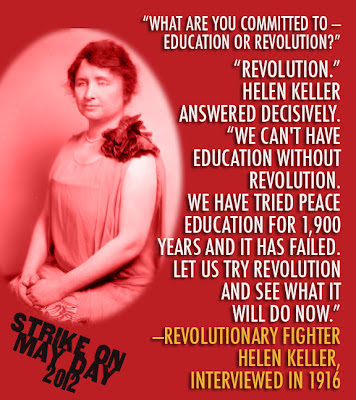 I noticed that virtual NGO Moveon.org was passing around a Helen Keller quote. It's a nice quote about class, ("The country is governed for the richest, for the corporations, the bankers, the land speculators, and for the exploiters of labor, The majority of mankind are working people. So long as their fair demands are naught...we can have neither men's rights nor women's rights....") but it's an incomplete thought about the legacy of the legendary Helen Keller. Because the absolutely incredible Helen Keller was not just a social justice activist, she was a revolutionary socialist. First a member of the Socialist Party and later the Industrial Workers of the World, she had remarkable insight into the way the world worked, despite her disabilities. One might literally say that capitalism is such an oppressive system that even a blind person can see it.

A lot of the people in MoveOn.org are well-meaning, but the group has become a sort of shill for the Obama administration, and it's busy somewhat questionably muddying the waters between the Occupy movement and the Democrats through its "99% Spring" initiative. Somehow one doubts that MoveOn.org wants people to dig too deeply into Helen Keller's political legacy. 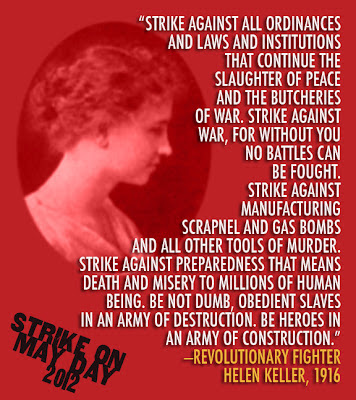 There was no nonsense or equivocation about the First World War from Keller. Like the wing of the socialist movement that broke from social democracy to form the communist movement, Keller refused to let her nationality get in the way of her solidarity with working people on the other side of a brutal, meaningless battlefield.

"I am no worshiper of cloth of any color, but I love the red flag and what it symbolizes to me and other Socialists. I have a red flag hanging in my study, and if I could I should gladly march with it past the office of the Times and let all the reporters and photographers make the most of the spectacle." — 1912

"The worker has nothing to lose but his chains, and he has a world to win. He can win it at one stroke from a world empire. We must form a fully equipped, militant international union so that we can take possesion of such a world empire. " — 1915

"In such a crisis the capitalist class cannot save itself or its institutions. Its police and armies will be powerless to put down the last revolt. For man at last will take his own, not considering the cost. When that day dawns, if the workers are not thoroughly organized, they may easily become a blind force of destruction, unable to check their own momentum, their cry for justice drowned in a howl of rage. Whatever is good and beneficent in our civilization can be saved only by the workers. And the Industrial Workers of the World is formed with the object of carrying on the business of the world when capitalism is overthrown. Whether the IWW increases in power or is crushed out of existence, the spirit that animates it is the spirit that must animate the labor movement if it is to have a revolutionary function." — 1918

"Men vanish from earth leaving behind them the furrows they have ploughed. I see the furrow Lenin left sown with the unshatterable seed of a new life for mankind, and cast deep below the rolling tides of storm and lightning, mighty crops for the ages to reap." — 1929

Find more of her socialist writings here. There is also speculation that Helen Keller was a lesbian.
Posted by ish at 7:48 PM 3 comments: 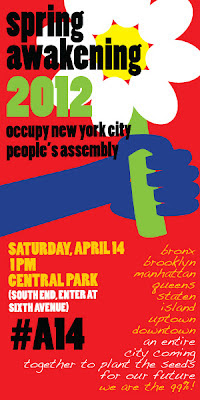 "Spring Awakening 2012: Occupy New York City People's Assembly" is set for next weekend in New York City's Central Park. Full details are at the event's website here, and at their Facebook page here. 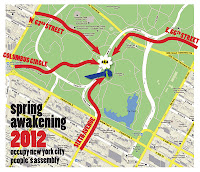 The event is in two parts, from 1pm to 3pm a open space gathering full of "soap boxing, teach-ins, music" and information/literature tables and blankets. The second half will be a facilitated assembly: a sort of rally that will break down into smaller groups to discuss strategy and planning for the Occupy movement in the upcoming period. It should be an interesting day, and it's not set as any kind of long-term occupation nor confrontation with authority so it should be our day in our space without the threat of state repression. A lot of folks from different Occupy groups and community and political organizations have been in on the planning. The Occupy group I've been participating in, Occupy/Ocupemos Sunset Park, should be representing.

Full disclosure: I'm proud to say I've designed the flower-in-a-fist publicity materials for this event.
Posted by ish at 4:48 PM No comments: 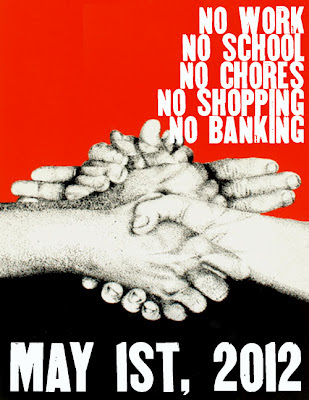 No work
No school
No chores
No shopping
No banking

Who couldn't get behind all that? If that's what a general strike looks like today, I'm all for it.

May Day plans for New York City are unfolding: Maydaynyc.org
Posted by ish at 11:19 PM 2 comments: 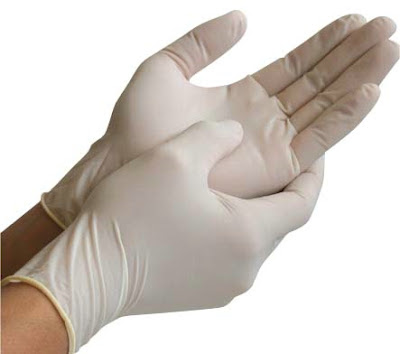 Apparently the Fourth Amendment to the U.S. Constitution, "The right of the people to be secure in their persons, houses, papers, and effects, against unreasonable searches and seizures, shall not be violated, and no Warrants shall issue, but upon probable cause, supported by Oath or affirmation, and particularly describing the place to be searched, and the persons or things to be seized," doesn't mean what you thought it meant.

The U.S. Supreme Court today ruled that "Every detainee who will be admitted to the general population may be required to undergo a close visual inspection while undressed," (translation: strip searched, including full body-cavity search) even if "the detainee" has been arrested only for something as trivial as a traffic violation. Of course it was a five-four vote, with the four right-wing justices joined by right-moderate Kennedy, and opposed by the four alleged right-liberals on the bench. Thus with the stroke of a pen, one of the supposed bedrocks of American civil rights, one of the very bill of rights itself, is gutted.

The New York Times reports on the case of a man arrested for speeding and held in error on an outstanding warrant: “Turn around,” Mr. Florence, in an interview last year, recalled being told by jail officials. “Squat and cough. Spread your cheeks.” Yes, that is now legal. With absolute impunity, according to the alleged final authority on the law and the U.S. constitution.

Women and black people have long understood the limitations of legal protections written two hundred years ago by a bunch of rich, white male slaveowners, but now it's clear to everybody: "The right of the people not to be searched in their persons" does not include protection from cops looking up your asshole on their whim. Not according to a bunch of crazy right-wing Republican congressmen, but according to the fucking Supreme Court of the United States. And you thought the ruling that brought us "corporations are people" was a problem.

A note on the paucity of posts here in the last week: I've been busy with the real world, which is a good thing. Building for my local Occupy group, including our push for May Day celebrations, "a day without the 99%." But I've also been fuming over the Trayvon Martin case, so angry at white America's anguish over George Zimmerman I've been scarcely able to organize my thoughts. I'm not sure which rediscovery is worse: the way racism is revealed to be so deeply woven into the fabric of white American culture, or the absolute inability beyond mere denial of white Americans to even acknowledge the possible existence of that racism. From liberals like the NY Times' columnist Gail Collins suggesting the issue at the center of the Martin tragedy is "gun control," (as though limiting rope sales would have effected anything in the era of lynching), to people posting (false) pictures of an allegedly gold-toothed Martin (to what, prove he deserved to die?) that have been spread by outright fascists like Stormfront and eaten up by white Americans unwilling to understand the real world, I've been disturbed and demoralized to the point of inarticulateness. But here we are. Hopefully my voice is coming back. —ISH
Posted by ish at 10:37 PM 3 comments: