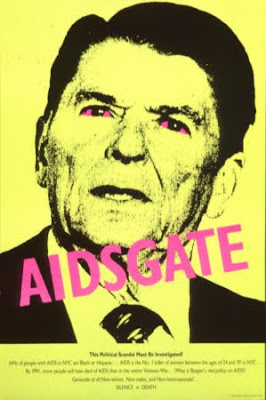 Tomorrow is your 100th birthday. You know, we thought, back when you were alive, when you were the president, we wouldn't survive you. In fact many of my friends did not actually survive you; and I miss them. I don't miss you. It was a terrible time, those Reagan years, no matter what they pretend now. No, we are not nostalgic for that time. It was a dark time, a painful time, an awful time knowing someone so genuinely evil had so much power.

I remember your disdain for us. In April 1987, you said: "Let's be honest with ourselves, AIDS information can not be what some call 'value neutral.' After all, when it comes to preventing AIDS, don't medicine and morality teach the same lessons." We knew what you meant. You meant we deserved to die. You couldn't even bring yourself to say the word gay in polite conversation. That health crisis you were being so smugly self-righteous about happened on your watch and you did.... nothing.

Some people thought it was funny when you joked about starting a world war. "We begin bombing in five minutes," you said. Your lackeys laughed. I remember the chill down my spine. How dare you joke about obliterating millions of people when your finger is actually on the button.

Ronnie, you were a big fucking fake. You were a terrible actor in bad movies when you worked in Hollywood, and you were a terrible actor in a bad nightmare when you were picked by the military industrial complex to work in Washington. It comes as no surprise to me that your son -- remember him, the GAY one? -- he said you showed signs of senility and dementia in the late 1980s. Trust me, he was being kind. You showed those signs in the early 1980s. But somehow they wanted to believe you so badly, those people who voted for you. They hoped you were a kindly old grampa, miraculously adding one plus one and coming up with three.

I remember the way you tilted your head, the way you laughed at your own jokes, your honed sense of Hollywood timing. Your smugness. Oh I give you credit for remember a few actor's tricks.

A lot of people were burned out by the 1970s, seeing the scabs picked off the open wound that was America. When you lied and said you would make it all better people ate that shit up. All you had to do was keep lying. Oh yes, we remember the lie of "trickle down economics." We remember who got rich. We're still paying for that now.

I survived you. I remembering hearing Maya Angelou's poem at Bill Clinton's inaugural in 1993 after 8 years of your rule and 4 more of your CIA crony George Bush the elder. I cried today rereading this poem, like I cried when I heard it the first time, the catharsis of knowing your nightmare was over. She spoke for all of us back in 1993:

"A Rock, A River, A Tree
Hosts to species long since departed,
Marked the mastodon.

The dinosaur, who left dry tokens
Of their sojourn here
On our planet floor,
Any broad alarm of their hastening doom
Is lost in the gloom of dust and ages.

But today, the Rock cries out to us, clearly, forcefully,
Come, you may stand upon my
Back and face your distant destiny,
But seek no haven in my shadow.

I will give you no more hiding place down here.

You, created only a little lower than
The angels, have crouched too long in
The bruising darkness,
Have lain too long
Face down in ignorance.

The Rock cries out today, you may stand on me,
But do not hide your face.

Across the wall of the world,
A River sings a beautiful song,
Come rest here by my side.

Each of you a bordered country,
Delicate and strangely made proud,
Yet thrusting perpetually under siege.

Your armed struggles for profit
Have left collars of waste upon
My shore, currents of debris upon my breast.

Yet, today I call you to my riverside,
If you will study war no more. Come,

Clad in peace and I will sing the songs
The Creator gave to me when I and the
Tree and the stone were one.

Before cynicism was a bloody sear across your
Brow and when you yet knew you still
Knew nothing.

The River sings and sings on.

There is a true yearning to respond to
The singing River and the wise Rock.

So say the Asian, the Hispanic, the Jew
The African and Native American, the Sioux,
The Catholic, the Muslim, the French, the Greek
The Irish, the Rabbi, the Priest, the Sheikh,
The Gay, the Straight, the Preacher,
The privileged, the homeless, the Teacher.
They hear. They all hear
The speaking of the Tree.

Today, the first and last of every Tree
Speaks to humankind. Come to me, here beside the River.

Plant yourself beside me, here beside the River.

Each of you, descendant of some passed
On traveller, has been paid for.

You, who gave me my first name, you
Pawnee, Apache and Seneca, you
Cherokee Nation, who rested with me, then
Forced on bloody feet, left me to the employment of
Other seekers--desperate for gain,
Starving for gold.

You, the Turk, the Swede, the German, the Scot ...
You the Ashanti, the Yoruba, the Kru, bought
Sold, stolen, arriving on a nightmare
Praying for a dream.

Here, root yourselves beside me.

I am the Tree planted by the River,
Which will not be moved.

I, the Rock, I the River, I the Tree
I am yours--your Passages have been paid.

Lift up your faces, you have a piercing need
For this bright morning dawning for you.

History, despite its wrenching pain,
Cannot be unlived, and if faced
With courage, need not be lived again.

Lift up your eyes upon
The day breaking for you.

Give birth again
To the dream.

Women, children, men,
Take it into the palms of your hands.

Mold it into the shape of your most
Private need. Sculpt it into
The image of your most public self.
Lift up your hearts
Each new hour holds new chances
For new beginnings.

Do not be wedded forever
To fear, yoked eternally
To brutishness.

The horizon leans forward,
Offering you space to place new steps of change.
Here, on the pulse of this fine day
You may have the courage
To look up and out upon me, the
Rock, the River, the Tree, your country.

No less to Midas than the mendicant.

No less to you now than the mastodon then.

Here on the pulse of this new day
You may have the grace to look up and out
And into your sister's eyes, into
Your brother's face, your country
And say simply
Very simply
With hope
Good morning."

(Top graphic is a legendary poster from the AIDS activist organization ACT-UP. Maya Angelou's poem is called "On The Pulse of Morning," and seems to be generally reprinted in full on the net but of course it's her copyright.)
Posted by ish at 7:46 AM