Who Will Tell the Truth Now that Gil Scott-Heron Is Gone? 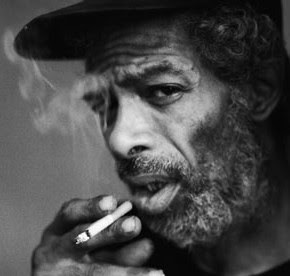 It got by George Washington
slave-owner general

It got by Gerald Ford
Oatmeal man

The blues is in the street
America has got the blues
But don't let it get by us
(Bicentennial Blues, 1976)

He had a complete vision of the way things were. He wasn't afraid to take the symbolism of America head-on. He knew the history and the facts, and he knew what it was like to experience the reality of racism, violence and hypocrisy. He knew how much life costs.

He was pissed off. And found a way to express it clearer than any. He channeled bitterness into lyric beauty. Here he is on the pardoning of Richard Nixon. 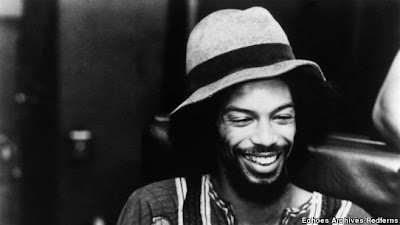 But Gil Scott-Heron knew how to laugh through tears. His poems — his songs — were witty and expressive and moving, but they also expressed a wry sense of humor. Mixed with outrage, for sure, and brilliance, but deadly funny.

Green Acres, The Beverly Hillbillies, and Hooterville
Junction will no longer be so damned relevant, and
women will not care if Dick finally gets down with
Jane on Search for Tomorrow because Black people
will be in the street looking for a brighter day.
The revolution will not be televised.
(The Revolution Will Not Be Televised, 1971)

He was not always an optimistic man. His outlook could be bleak: he knew what the odds were, the strength of what he was — we are — up against.

So you cry like a baby
Or you go out and get high
But there ain't no peace on Earth, man
Maybe peace when you die
(A Sign of the Ages, 1971)

There's a sense of duty and obligation in his lyrics too. He knew what he had to do. Even as he fought his inner demons he couldn't set down his weapons in the battle for justice. I think it made him weary. But he was never able to stop, completely.

We want to be free
Yet we have no idea
Why we are struggling here
Faced with our every fear
Just to survive
We've heard the sound
And come around
To listening
(Beginnings/First Minute of a New Day, 1975)

As Wall Street goes, so goes the nation
And here's a look at the closing numbers: Racism's up, human rights are down.
Peace is shaky, war items are hot — the house claims all ties.
Jobs are down, money is scarce and common sense is at an all-time low on heavy trading. Movies are looking better than ever and no one is looking because we're starring in a B-movie.
You don't need to be in no hurry
You ain't never really got to worry.
Just keep repeating that none of this is real.
This ain't really your life,
Ain't really your life,
Ain't really nothing but a movie.
(B-movie, 1981)

Gil Scott-Heron was, to all appearances, an anguished soul. He fought drug addiction his whole life, and lived that side of his life in the lyrics of his songs, openly sharing his pain. His last two records were full of the hard toll on his life. His honesty is almost painful to listen to.

Life is like a circle and you end up where you started
If you end up where you started ain't no other side
Yeah but if like is like a curtain then I'm 90% certain that I'm looking through at something
Yes I'm almost touching something on the other side
If life is like a mirror than the nearer you get clearer
You can see it so much clearer
Feel like you know about the other side
My friends all swear they know
What I should do with my life
How I should run my life
What should be happening with my life
They're on the other side
They're on the outside
I'm on the inside
(The Other Side, 1994)

Gil Scott-Heron is gone now, way too soon, at the age of 62. I'm happy for the legacy he left behind, the music; but I can't believe I never got to see him, and I can't believe there will be no more.

Who will tell the truth now that Gil Scott-Heron is gone? Peace go with you, Brother.

Straddling the darkness
he controlled the bucking thrusts and rode on
into the emptiness that he alone would try to fill
into the middle to try to be the bridge between spirits
EXPAND he screamed
the vacuum was aroused, suspicious and alarmed
who would dare? but on he rode...
(And then he wrote Meditations, 1972)

(All italics are lyrics by Gil Scott-Heron).

UPDATE: Here's an audio tribute from my friend Blackclassical.