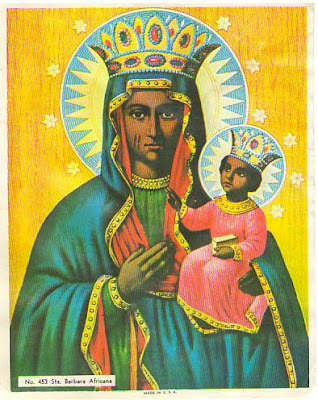 "Why is Haiti so poor? ... Haiti, like most of the world’s poorest nations, suffers from a complex web of progress-resistant cultural influences. There is the influence of the voodoo religion, which spreads the message that life is capricious and planning futile." -- David Brooks, OpEd column in The New York Times, Jan 14 2010.

"[Something] happened a long time ago in Haiti, and people might not want to talk about it. [The Haitians] were under the heel of the French. You know, Napoleon III and whatever, and they got together and swore a pact to the devil. They said, 'We will serve you if you will get us free from the French.' True story. And so, the devil said, 'OK, it's a deal.' You know, the Haitians revolted and got themselves free. But ever since, they have been cursed by one thing after the other." -- televangelist Pat Robertson, on TV, Jan 13 2010.

You know Pat Robertson. He's one of those long-running peddlers of hatred and intolerance masquerading as a spiritual leader on the television. He routinely blames people he hates for natural disasters. AIDS, Hurricane Katrina, you name it. So it's no big surprise that he would blame the Haitian earthquake on voodoo, repeating an old slander of racist Euro-American slaveholders against the world's first black republic.

You know David Brooks. He's the moderate, "thinking man's conservative," a self-styled intellectual who regularly publishes an OpEd column in the New York Times. And what do you know, here he's spewing the same racist filth about Haiti and voodoo as Pat Robertson. Oh, it's tidied up. Surely Brooks knows the history better than Robertson. Surely Brooks knows it was Napoleon Bonaparte himself not Napoleon III who the Haitian slaves displaced when they broke the chains of slaveholding colonialism more than two centuries ago.

"Voodoo" or "vodoun" is not some quaint socially regressive superstitious practice. It's an authentic religion, carried in the bellies of slave ships, from West Africa to the New World. Like its sister religion Santeria, Vodoun is a nature religion, combining ancestor reverence, channeling the spiritual powers of nature and respect for an all-powerful God. Can you imagine the scandal if a New York Times columnist blamed the catastrophic history of Europe on "the influence of Judaism which spreads the message of passivity and obedience"?

Vodoun is an uplifting path; it links its practitioners to the mysteries of the universe and transcends the tragedy of the middle passage. It will also, no doubt, help its believers to transcend the tragedy that has now befallen the island of Haiti with this powerful earthquake, and give them succor in rebuilding their lives and their nation. It should come as no surprise to any student of religion that among Haitian practitioners of Vodoun there have been both saints and rogues.

So now you know David Brooks and Pat Robertson: it turns out they are brothers under the skin, sharing the bond of intolerance and racism and white superiority. And sharing utter narcissicm in displaying their ignorant prejudices at the worst possible moment.

Ayibobo! Peace and blessings to the people and spirits of Haiti.
Posted by ish at 7:35 PM